With someone stabbed and Piper being transferred down to the scary prison system in Virginia, it seems like the original crew is being phased out. What will happen in Orange is the New Black season 2 episode 12, entitled “It Was the Change”?

Here is a recap, review, and list of the 5 biggest spoilers:

1. We Learn the Shanking Was Meant for V

The war between Red and V intensifies as we learn that Taystee was stabbed by accident. The attack was apparently meant for Vee, but the elderly stabber was not wearing her glasses at the time of the attack.

At a meeting of the two rival factions in the green house, V threatens to bring a war to Red in return for the stabbing. Vee does not mess around. She tells Red that she knows exactly where her son lives, and so do her “boys.” The scene comes to a tense conclusion when a weather related emergency requires them to return to the prison.

With the huge hurricane coming, the problems begin when water starts flowing out of the toilet. This is quickly followed by a flooded basement, no power, and no working plumbing at all. To avoid the flooding, the feuding factions all must live on cots on the floor in one common room. Piper is walking around in the flooded basement trying to figure out how on Earth to fix the power.

Shortly after she can feel the baby kicking for the first time, Daya is sleeping in the room with all of the other women on cots when she feels as if she can’t breath. This only gets worse when a guard demands she do jumping jacks. The exercise actually helps her regain her breath.

We already know Figueroa is embezzling some kind of money from the prison, but no one has really been able to prove it. With the power out and the guard asleep, Piper is able to sneak into an office and grab a file. She is caught by a guard on her way out. What will happen now? 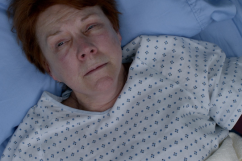