It seems like the relationship between Katy Perry and Diplo is here to stay.

In May, In Touch reported that the two had split because Perry freaked out when the DJ wanted to introduce her to his parents.

“Diplo broke up with her because she does not want to be in a serious relationship. She’s doing OK and not too sad about it. They wanted different things,” a friend of the Roar singer told the publication.

However, things look as though they’re on the mend since they were spotted together on Monday night in Vegas.

1. They Partied in Vegas

In the midst of her Prismatic tour, Perry still made time for her love life.

It was reported that they were at the restaurant Andrea’s, inside Encore at Wynn Las Vegas on Monday night. They were amongst a group of 14 celebrating a friend’s birthday.

Later in the evening, they headed over to XS nightclub, where Diplo was spinning.

“Even though she was on stage, most people didn’t know she was there. She was twerking really hard … and Diplo played “Dark Horse,”” a source told People.

2. They Posted the Same Hammock Pic

On June 8, Perry posted this Instagram picture of her lounging.
That same Sunday, Diplo, whose real name is Thomas Wesley Pentz, posted a photo of his feet resting on the same hammock.

He later deleted the incriminating photo, but Perry kept hers up.

3. They Went to Coachella Together Rumors first swirled of them being an item at April’s Coachella.

They were getting flirty at the Jeremy Scott-Adidas party.

Page Six reported at the time:

Katy and Diplo hooked up at Coachella. They were together behind the main stage, where she had a tour bus or trailer, and a group of her friends were hanging out.

In May, Diplo’s mom told Radar Online, “He hasn’t discussed it with me, but he did with his dad. He said ‘we’re just hanging out. We’re just friends right now.”

Perry was first linked to Diplo in April, and she broke up with John Mayer just months before, in February.

In the July issue of Cosmopolitan, she was asked if she’d ever get back together with Mayer and her reply was:

I know it sounds really hippie-s—t, but I’m living in the now and not fantasizing about the future or [being] torn up about the past. I’m super Eckhart Tolle. I have a lot of respect for [John] still, and I know it goes both ways.

Diplo dated M.I.A. for five years, making them a very powerful couple in the industry. In an interview with Clash Music, he talked about his ex, saying, “She was really abusive, telling me I wasn’t good enough or fast enough.” 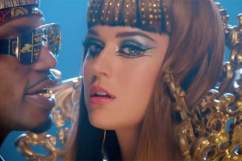 Read More
5 Fast Facts, Celebrities, Diplo, John Mayer, Katy Perry, M.I.A., Music
Katy Perry and Diplo are still dating. Although there were rumors the two had split, they were spotted in Vegas on Monday.