Penelope Cruz and Javier Bardem have made headlines for taking a stance against the conflict in Gaza.

The Spanish couple joined together with other big names to sign a letter that asked the European Union to “condemn the bombing by land, sea and air against the Palestinian civilian population in the Gaza Strip.”

They signed an open letter with other celebrities like directors Montxo Armendariz and Benito Zambrano; actors Lola Herrera, Eduardo Noriega and Rosa Maria Sarda; and musicians Amaral and Nacho Campillo.

According to the Hollywood Reporter, “In an open letter referenced by Europa Press and other Spanish media, they described Israel’s actions as “genocide.””

2. They Both Won Academy Awards

Cruz took an Oscar home for her supporting role in Vicky Cristina Barcelona.

For his supporting role in No Country For Old Men, Bardem also won an Oscar in 2007.

They both starred in 1992’s Jamon, Jamon. It was Cruz’s first movie.

In the scene above, we witness Bardem passionately planting a kiss on his future wife in a club.

In an interview with GQ, he said:

I’m happily married. I breathe and stay in peace. I truly thank whoever’s up there for giving me the opportunity to be loved.

Years later, they went on to costar in Vicky Cristina Barcelona, with Cruz playing his emotional ex.

Watch the clip below, where the love triangle between them and Scarlett Johansson’s character plays out on screen.

And the name of Penélope Cruz and Javier Bardem's baby daughter is………. Find out at http://t.co/wzAiP0x49C !! pic.twitter.com/SAsHZFlusG

They have a son, Leo, and a daughter, Luna.

In 2011, Cruz told Vogue, “I want my son — and my kids if I have more — to grow up in a way that is as anonymous as possible. The fact that his father and I have chosen to do the work that we do doesn’t give anybody the right to invade our privacy.”

He professed his love for Cruz during the 2010 Cannes Film Festival. In the video above, subtitled in English, he said, “To my girlfriend, my companion, my love: Penelope. I owe you so much and I love you a lot.”

The camera then cut to Cruz, and we see her tears of happiness as she blows him a kiss. 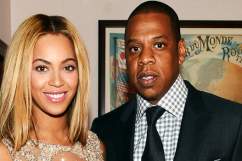