On tonight’s episode of Top Chef Duels, Chef Brooke Williamson battles it out with Shirley Chung. Read on for the facts on the dueling pair.

Wiilliamson pulls no punches in her challenge against Chef Chung. Bravo TV writes:

Both finalists in their respective seasons, Los Angeles Chef Brooke Williamson and Las Vegas Restaurant Consultant Shirley Chung were mere inches from victory, but the title slipped through their fingers. Now is their time for redemption. First, Shirley challenges Brooke to a “weird shellfish” showdown and then Brooke attacks Shirley’s Achilles heel and asks her to make a vegan dessert.

2. Pink Is the Celebrity Guest

On tonight’s episode, the special guest judge is celebrity Pink, prompting the theme for the battle to be the circus. Music artist Pink often brings circus acts and acrobatics to her shows, so this is a natural fit.

3. Chung Has Her Own Consulting Business

In April 2014, Chung announced her first restaurant venture called Restaurant 28, open in Orange County near Fashion Island. Up until this point, Chung has been doing her own culinary consulting with her company Chung Lee Consulting in Las Vegas.

4. Williamson is Co-Executive Chef and Co-Owner of Playa Provisions

Brooke is Co-Executive Chef and Co-Owner of Playa Provisions in California and has her husband helping her in the kitchen for her big battle. In the above clip, Pink asks her what it’s like working with her hubby, saying that it may not be the best idea to have sharp objects around. Williamson laughs and reveals she’s actually never known Nick outside the kitchen.

Before their competition in the kitchen, Williamson and Chung have some fighting words to share. Check it out in the above video. 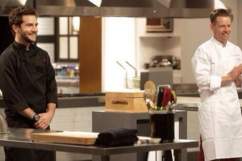 Read More
Celebrities, Reality TV, Top Chef, TV, Twitter
Chefs Shirley Chung and Brooke Williamson battle it out in the kitchen for tonight's episode of Top Chef Duels. Who wins and who's eliminated? Pink comes on as guest judge.