As the story goes, Joan Rivers was undergoing a routine procedure on August 28 when she stopped breathing, a complication that led to her eventual death.

So how did things go so horribly awry?

In a bombshell revelation, a source now tells Daily News that one of Rivers’ own doctors decided to do an unplanned biopsy of a mass found on her vocal chords — a more dangerous procedure than the planned endoscopy.

The source says the biopsy should not have been allowed at the Yorkville Endoscopy clinic, a non-hospital setting.

When the doctor, who “arrived with her entourage,” performed the surprise biopsy, Rivers’ vocal chords spasmed and blocked her airway.

In the video below, a doctor discusses laryngospasm, which the Mayo Clinic describes as a “spasm of the vocal cords that temporarily makes it difficult to speak or breathe.”

Laryngospasm: Sudden, Terrifying Difficulty BreathingDr. Robert Bastian of Bastian Voice Institute explains laryngospasm with video of the larynx and a simulated attack. Laryngospasm is a sudden, often severe attack of difficulty breathing, typically lasting between 30 and 90 seconds. Usually the individual makes a frightening noise while trying to breathe in during the episode, which they often call a…2008-07-07T22:14:04.000Z 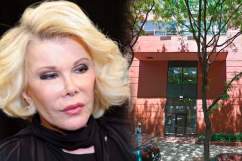