The View picks up three new hosts for its 18th season – Rosie Perez, Nicolle Wallace, and Rosie O’Donnell. Read on for the facts on O’Donnell’s past on The View, her health scares, her children, and her wife.

1. This Is O’Donnell’s Second Time as a Host on The View

In September 2006, O’Donnell replaced Meredith Vieira as a co-host and she was on the show through 2007. Ratings rose by 27% during O’Donnell’s first year on The View, so producers are hoping she’ll have the same effect on the show her second time around. O’Donnell often clashed with former co-host Elisabeth Hasselbeck, whose views were more conservative. O’Donnell was encouraged by the show to be outspoken and this often created conflict. O’Donnell ended her contract with the show early after a heated argument with Hasselbeck on the show.

Aside from Hasselbeck, O’Donnell had a big feud going on with Donald Trump. In December 2006, O’Donnell criticized Donald Trump on air for reinstating Miss USA Tara Conner, who had violated pageant guidelines, saying that he shouldn’t be a moral role model. She even made fun of his famous hair. In response, Trump appeared on several shows blasting O’Donnell and he also threatened to sue her, which he didn’t. O’Donnell’s feud with Trump caused a rift between her and Barbara Walters because O’Donnell felt that Walters hadn’t defended her against Trump.

2. She Almost Died of a Heart Attack

Hours after helping a woman who was struggling to get out of her car, O’Donnell felt something strange happening to her. Her body ached and she felt bruised, but she dismissed it as over-exertion. The pain, however, persisted. Her skin started feeling clammy, her temperature rose and she threw up … O’Donnell waited until the following day to see her doctor, as her symptoms hadn’t gone away. That’s because while an aspirin can help with symptoms, it won’t stop a heart attack – which is precisely what O’Donnell was experiencing. An EKG revealed that she had 99 percent artery blockage, a situation called “the widow maker.”

O’Donnell is extremely lucky to be alive today, and, since her heart attack, has adopted a more healthy lifestyle.

Michelle Rounds and Rosie O’Donnell met at a Starbucks. The two began dating in 2011 and announced their engagement only months later. The two married in the summer of 2012 and they adopted a daughter named Dakota together. Their wedding was pushed up a couple months because Rounds was suffering from a rare form of tumors and she needed surgery to get them removed. The two were supposed to have wed in August, but ended up marrying in a small ceremony in June. In August, O’Donnell had her heart attack. The two would have been on their honeymoon and O’Donnell probably wouldn’t have lived. O’Donnell has stated that her wife’s tumors saved her life.

For more information on Rounds, her health, and her life with O’Donnell, check out the below link: 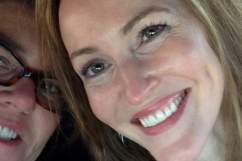 4. Her Mother Died of Breast Cancer

Her father took the loss particularly hard. Becoming emotionally distanced from the rest of the family, O’Donnell’s father coped by removing most of his wife’s belongings from the family home. One of the few reminders of their mother that escaped their father’s touch was an old record collection. O’Donnell and her siblings often sought comfort by listening to their mother’s albums—particularly the Barbra Streisand records.

O’Donnell says that her mother would play her Streisand records while she cooked dinner and the kids would all sing along. Her mother was buried on her birthday and she, as well as her siblings, did not attend the funeral.

O’Donnell’s marriage to Carpenter was seen as defiant against President George W. Bush and O’Donnell responded with these words:

We were both inspired to come here after the sitting president made the vile and hateful comments he made … [O]ne thought ran through my mind on the plane out here – with liberty and justice for all.