Lenny Kravitz is a singer, songwriter, musician, record producer and American rock star with a net worth of an estimated $40 million. He’s also performing at the 2015 Super Bowl as headliner Katy Perry’s special guest performer. Read on for the facts on Kravitz and all his famous relatives, plus his dating life.

Lenny Kravitz is the son of actress Roxie Roker, who was best known for playing the role of Helen Willis on the TV sitcom The Jeffersons. She also had guest-starring roles on shows including Punky Brewster, Hangin’ with Mr. Cooper, A Different World, Murder, She Wrote, The Love Boat, 227, and Beat the Clock. Roker died of breast cancer on December 2, 1995 of breast cancer at 66 years old. Al Roker is her cousin.

Kravitz’s father Sy Kravitz was in the entertainment industry as well, as an NBC television news producer.

2. Kravitz’s Daughter Zoe Is A Celebrity As Well

Lenny Kravitz’s daughter Zoe is well-known as an actress, but also for her celebrity lovers. For a short time, Zoe dated her X-Men co-star Michael Fassbender. She was also in a long-term relationship with Gossip Girl star Penn Badgley and the two briefly lived together. They split in 2013, and since then, Zoe was last romantically linked to sexy actor Chris Pine.

In addition to acting, Zoe Kravitz has been a model for prestigious fashion campaigns with Swarovski, Alexander Wang, and Vera Wang.

Kravitz currently isn’t reported as dating anyone specific and his only marriage was to the mother of his daughter, The Cosby Show actress Lisa Bonet. The two met backstage at a New Edition concert and became close friends for two years before dating. The two bonded over their both being half African American and half Russian Jewish. Kravitz then moved to New York City to live with Bonet. On November 16, 1987, Bonet’s 20th birthday, the two eloped in Las Vegas. The two divorced in 1993.

When reflecting on her relationship with Kravitz, Bonet stated:

It was interesting when we were first finding out about each other, that our backgrounds were so similar. When I first told him my mom was Jewish, and he said ‘So’s my dad,’ I thought that was both unusual and enchanting. I felt like, ‘Okay, here’s someone who really knows how it is.’ And I think I trusted him a little more with my feelings and let him inside a little more than I ordinarily would have.

Other high-profile relationships that Kravitz had were with Vanessa Paradis, Nicole Kidman and model Adriana Lima.

4. Kravitz Drew Inspiration For His Hunger Games Role From His Bisexual Friend

Kravitz played the role of Katniss’ stylist, Cinna, in the movie The Hunger Games. Kravitz explained to Celebuzz:

I’ll be quite frank with you — I didn’t know about Hunger Games — so when I’m telling kids and they say, ‘Who are you playing?’ and I say Cinna, they go, ‘Oh you’re playing the gay guy.’ That was an actual answer. I’ve never brought that up yet. That’s how they perceived it. So I thought about it, and I read the book and I don’t see that he is or isn’t [gay]. He’s a designer, he’s a stylist, he has gold eyeliner—that doesn’t mean anything either way.

The question was how far do we go with him. The idea was to pull it back and create a character that’s more like a Tom Ford or an Yves Saint Laurent so he wouldn’t be too outrageous. He’s classic, he’s got his gold. I kind of played him in the middle … I actually have a friend who is a dancer who is bisexual, and he was a lot of inspiration for my speech pattern and my rhythm, and kind of the way I sauntered in and out a little bit.

5. His Song “Lady” Was Written About Ex Nicole Kidman

Kravitz and Nicole Kidman were a couple and during that time, Kravitz is reported to have written his song “Lady” about her. It was the single from his 2004 album “Baptism” and was featured in several GAP ads. Kravitz told Ask Men:

I’m not naming any names, but it’s about a certain person, a woman I saw a lot and with whom I was together. Unfortunately, as you probably know because the media followed the relationship closely, the story didn’t end as happily as it does in the song. The reality wasn’t quite as romantic. But the liaison was, of course, still a first class inspiration.

Kidman reportedly called off plans to marry Kravitz when he was spotted out with Brazilian artist Isis Arruda. 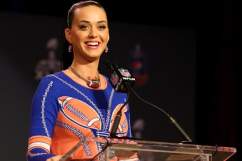