Danced the most magical dance with @robertherjavec tonight. This is why I love to dance and love @dancingabc

Robert Herjavec is a prominent face on both Shark Tank and Dancing With The Stars season 20. He’s also the most talked about contestant as the dating rumors continue to swirl around Herjavec and his DWTS partner Kym Johnson. The duo have been flying all over the country, celebrating holidays together, and creating killer chemistry in the ballroom. For all the latest info on their relationship, check out our 5 Fast Facts below.

1. The Couple Is Often Spotted Showing Being Affectionate

Herjavec and Johnson are often spotted out together and are said to be very affectionate. A source talked about them to Us Weekly, explaining:

Kym and Robert were definitely attracted to each other from the get-go. They are constantly all over each other. She can’t stop talking about what a good, nice guy he is. They have insane chemistry and are actually a great match.

Herjavec has been taking Johnson to the Grand Canyon and all over Los Angeles at some of the best hot spots.

Herjavec and his wife Diane Plese are separated, but Herjavec is not yet divorced. The two met long before Herjavec earned his millions and they have a beautiful home together in Canada. Unfortunately, though Herjavec said they made a great team, he said they drifted apart over the years. Herjavec explained to People:

I just wanted to end it … It’s been a terribly difficult year. We were great parents and a great team, but over time we drifted apart … I was hollow and broken.

The two have been separated since July 2014. 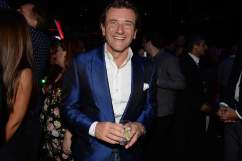 3. Johnson Has Never Tied the Knot

@erinandrews look what @robertherjavec surprised me with!

In the 2000s, Johnson was engaged to cricket player Shane Watson, but the two broke up after three years together. So, what does Johnson look for in a guy? In an interview with the Daily Telegraph, Johnson explained:

I’ve never been opposed to dating someone famous. But, I’ve grown up a lot and I want different things now. I’m looking for a good person I connect with. I can’t imagine myself without kids. I was in a relationship for three years and thought I was going to marry him and have kids – that takes a while to get over. I really want to be a mum. Hopefully I can find the right man.

With Herjavec, comes along three of his children, so perhaps Johnson would get her wish should things escalate between the two.

4. They Have Been Seen Kissing

Johnson and Herjavec have not yet planted kisses on each other in the ballroom, but they were spotted on camera kissing in the back parking lot of what appeared to be a restaurant. You can check it out in the above video provided by TMZ. 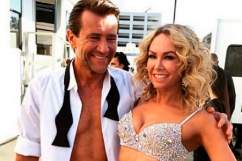 ‘Dancing With The Stars’ Kym Johnson: Is She Robert Herjavec’s Girlfriend?

5. Herjavec’s Wife Diane Plese Is Rumored to Have Her Doubts About Her Husband’s Relationship With Johnson

How handsome does @robertherjavec look in his tales!! We're ready for the waltz.. @dancingabc #dwts

Though Johnson and Herjavec haven’t openly confirmed their dating, there are rumors that Diane Plese is not very happy about the alleged relationship. Some outlets have said that Plese believes that the idea of Johnson and Herjavec dating makes her and the their kids look foolish, while other sources say that she’s worried about Herjavec’s mental state. Celebrity Dirty Laundry quotes an insider as saying:

Diane does not wish any ill will on Robert, and she wants her ex-husband to be happy. But, she knows that he is just going to get his heart broken, and after his dark depression over the divorce, she is scared for their kids’ sake that Robert will want to take his own life again.

When Herjavec was going through his separation with his wife, he contemplated suicide. 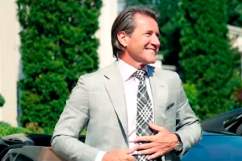