Barry Allen has been through a lot, hasn’t he? The 1st season of CW/DC’s The Flash was full of life altering events for the young crime scene investigator.

Super speed powers were acquired, new allies were gained, dangerous meta-humans reared their ugly heads and the true identity of Reverse Flash was revealed. Now we have all arrived at the final road stop for season one of The Flash. It’s time we got you up to speed (pun intended, of course) on what cliffhanger this awesome superhero show left us all on.

Here’s our recap of one of this season’s most important and jaw dropping episodes.

1. Barry Allen and His Arch-Nemesis Reverse Flash Confronted Each Other in a Tense Exchange

Barry Allen went through his usual intro, but this time it started with him and all his friends standing within S.T.A.R. Labs. Barry finally captured Eobard Thawne aka Dr. Wells aka Reverse Flash and proceeded to ask him why he killed his mother. Thawne answered by stating that he hates his future self, which is why he tried to wipe him off the face of the Earth as a child. The entire battle between both Flash’s played out once again. Thawne actually stabbed Barry’s mother in the heart. He explained how he got stranded and was forced to create Barry Allen as The Flash in order to help his travel back to his time period. Thawne wanted Barry to aid him in order to get what they both wanted, but Barry’s rage made him decline his rival’s proposition.

Back in the main section of the lab, everyone went over the possibilities regarding Barry attempting to change time and prevent his mother’s death and his father’s prison sentence. If Barry chose to reverse time, all the present events everyone is currently experiencing could be undone. Joe told Barry he had no choice but to change the past. Barry caught up with Joe as he was leaving the lab. Joe made it clear that Barry needed to do this and have the familial upbringing he always deserved.

2. Caitlin and Ronnie Decided to Revisit Their Wedding Plans

Barry returned to the prison where his father Henry was holed up. Barry explained what he was set out to do – go back in time to prevent the death of his mother. Henry chose to decide against it because it could possibly disrupt the normal order of things. Henry explained how proud he was of the man and hero Barry turned out to be. Henry made it clear that his Barry’s mother would be displeased if he chose to undo everything he grew up to become. Caitlin checked up on her boyfriend Ronnie, who told her that he was there to stay permanently. They agreed to get married for real this time.

Iris shared a nice conversation with Barry on a roof after dark. She asked him if he was willing to go through what he wanted to do and he still seemed unclear on what he should do. Iris and Barry spoke about the possible future of them getting married and how their current timeline may or may not have altered it. Iris told Barry it was time for him to do what’s right for himself and not what’s right for everyone else.

Barry confronted Thawne and asked him what it would take to go back in time. Thawne told him he would need to use the Particle Accelerator in order to enter a portal and get access to the past. Barry would need to run fast enough to complete his mission…or he could die if he fails to do so.

3. Eddie and Iris Got Back Together

Barry asked Cisco and everyone else what it would take to reach such a magnificent speed to go back in time. As they went over their options, Barry requested that Cisco construct a time machine to him. As Barry and Ronnie went over their plans to build that time machine, Cisco asked Thawne about his technological expertise. Cisco was still angry about the alternate timeline event where he was killed by Thawne. Thawne admitted that Cisco was affected by the Particle Accelerator explosion, too. Eddie came to S.T.A.R. Labs and spoke with the other half of Firestorm (Dr. Martin Stein). Stein explained that Eddie shouldn’t let Thawne’s promises to him about the future get to him. Once everyone gathered back together, Stein admitted that it was possible that a black hole event could occur and wipe out Central City.

Everyone spoke with Thawne about the dangers of using the Particle Accelerator one again. Barry was told that he only had a minute and 52-seconds to save his Mom before Central City was seriously put in danger. Joe and Barry spoke in private about what was truly for the best. Joe was still unclear on what needed to happen on Barry’s behalf. Joe was confident in Barry’s ability to be fast enough to complete his mission. Barry realized that he grew up to live a great life with great people all along.

Eddie came to share lunch and speak with Iris. Eddie spoke about a moment where he was supposed to go out on a date a while ago. It turns out that that date getting cancelled led to him first meeting Iris. Eddie noted that he was ready to love Iris once again and ignore the future. Dr. Stein held the wedding ceremony for Caitlin and Ronnie. With everyone around them, they both professed their love for another and became husband and wife. 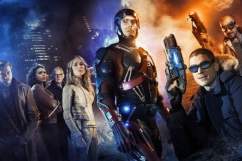 4. Barry Shared a Heartbreaking Moment With His Mother

The time finally arrived for Barry to use his powers to save his mother. His friends gave him the final details and encouragement he would need for his toughest mission yet. The Flash spoke to Thawne, who told him it was time to run as fast as possible. Flash managed to reach an amazing speed that transported him through all the events he went through in the past. Once Flash reached his maximum speed to enter the portal, he made it back in time safely. He spotted his young self and even his older superhero self, who told him not to save her.

Once Barry’s mother lay on the ground dead, she spoke to The Flash who came to rescue her. Barry took his mask off and revealed that he’s her son. Barry broke down as he told her that him and his dad were both okay. He made sure to tell her that she loved him and that this would be goodbye. As she drifted away, Barry broke down over her fallen body.

5. Eddie Sacrificed Himself in Order to Kill Reverse Flash

The wormhole stayed open as Reverse Flash got set to return to his time. In a cool nod to past versions of The Flash, the helmet belonging to the 1st ever Flash came through the wormhole. In an intense moment, The Flash returned to the present time to have a final encounter with his most hated foe. Everyone fought to close the wormhole while both Flash’s battled. The generator was shut down and the wormhole got closed.

In a surprising and sad moment, Eddie killed himself in order to erase Thawne (a member of his family bloodline) from existence. Thawne’s real identity and look were revealed once again before he finally disappeared. The wormhole popped back up and put everyone in danger. The Flash and his friends were forced to leave while Eddie was sucked into it. Once everyone ran outside, the black hole they all feared came to destroy Central City. The Flash utilized his powers in an amazing display to try and close the wormhole…