Alexa PenaVega usually dances with Mark Ballas on Dancing With the Stars, but it’s switch-up week on the show and Ballas is paired with famous home cook Paula Deen. This means that PenaVega is paired with Ballas’ super sexy buddy Derek Hough, who normally performs with Bindi Irwin. While PenaVega is a talented dancer, she hasn’t received as high of scores as she would have hoped over the past couple weeks. Perhaps Hough can bring a 10 out of her like he has done with Irwin.

Last week was very emotionally draining for Hough and Irwin because Irwin paid tribute to her late father, the Crocodile Hunter, which left the two exhausted. Hough wrote about the experience in his TV Guide blog, saying that:

Bindi said the most beautiful things to me afterward, things that I would feel weird repeating. They’re very, very kind. She was constantly thanking me and I just want to thank her for the opportunity to help her express her feelings. She’s never actually done this with anybody on a public level, talking about the grief, the heartache and heartbreak. It was a pretty big step. She was just thankful that I was there for her and we got through it together. It’s funny — we were saying how it’s kind of weird that now we’re apart for the switch-up. But I thought about it a little bit and it’s actually great because we cried all last week together. It was really intense and emotional. We need a little break from each other!

It takes two to Tango. #DWTS

After talking about the ordeal, Hough also dished on new partner PenaVega, stating:

I have Alexa for the switch-up and she’s awesome. She has an amazing capacity for movement. She can truly be a great dancer. My goal with her is polishing everything. I want refinement and to make her look clean and strong. We have a pretty cool concept in mind too for our tango. It’s only her second ballroom dance after her first this week, but I don’t feel like she’s behind or anything. She’s doing great and learns quickly.

PenaVega and Hough are performing the Tango on tonight’s episode of Dancing With the Stars. 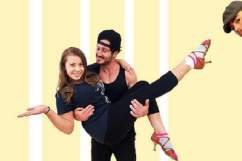