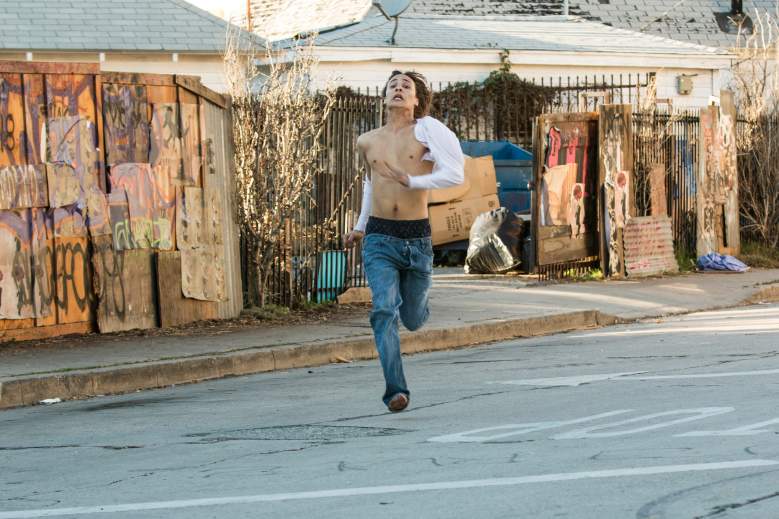 Everything’s about to go crazy in the world of Fear the Walking Dead. People we thought we could trust aren’t quite so trustworthy and an arena full of zombies is waiting to spill out into an unsuspecting town. Who’s going to make it out alive tonight? Will Travis ruin everything by being too nice?

This is the recap and review for Fear The Walking Dead’s season 1 finale, “The Good Man.” This is the episode where we finally feel like we’re part of The Walking Dead universe. The recap has spoilers up through the last episode.

When the episode starts, Travis and Madison have given up on their not-so-idyllic neighborhood. They’re packing up and driving east, which is pretty smart considering what we learned about Cobalt last week. But how will they get Liza and Nick? Daniel has a plan, and it involves the arena full of zombies near the base. Andy (the soldier who’s captured — I can never remember his name, can you?) offers to draw a map and help them figure out the compound so they can rescue their loved ones.

Ofelia’s struggling. All her life, she thought her dad was the victim. But now she knows that he was the source of the terror, and that’s a really hard thing to come to terms with. Andy, meanwhile, is trying to get Travis to let him go because he knows that Daniel will kill him, no matter how much he helps.  Fear, just like its predecessor, spends a lot of time on the theme that humans are just as bad as zombies, maybe even worse.

The family escapes the neighborhood a little too easily. They follow Daniel’s plan, releasing the zombies from the arena onto the military base to distract them. It’s a crazy sight. Hordes upon hordes of zombies are pouring onto the military base. For some reason, everyone decides it’s a good idea to leave Alicia and Chris are left alone in the parking lot — without guns or any way to defend themselves…

At the compound, the lawyer named Strand and Nick are hanging out. Strand seems like a Governor type, so I’m not sure how much I trust him at this point. Neither does Nick, since he snatched the guy’s key and was holding onto it for safe keeping. They leave to find a ride and someone named Abigail.

Back at the parking lot, a group of soldiers decides it’s easier to take Alicia and Chris’s SUV, which requires fighting them for a key, rather than just hot-wiring one of the many other cars in the parking lot. Doesn’t make sense, but it does create tension.

This Is Where Fear Really Begins 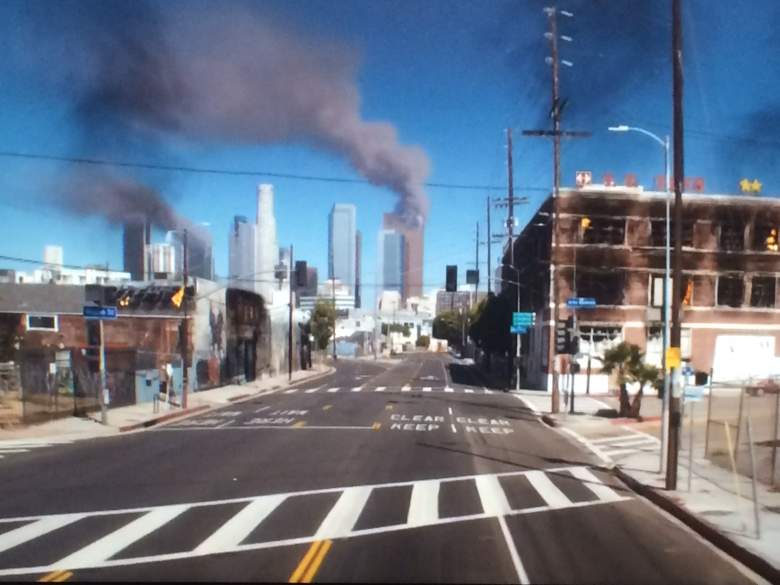 Los Angeles is burning in Fear the Walking Dead. (screenshot)

After a commercial break where we’re treated to a creepy KFC commercial with a guy pretending he’s Colonel Sanders, Fear the Walking Dead returns. The zombies are breaking into the compound. The scene where we scan across the parking lot and can see nothing but zombies is absolutely chilling. Liza is watching everything unfold as the horde breaks down the fence and gets inside. She’s overwhelmed, as many of us might be in that type of situation.

Liza reunites with Madison and company, and they barely save Strand and Nick from being eaten by zombies in an incredibly tense scene. I really thought Nick might be a goner, because that is totally The Walking Dead‘s style. Never get attached.

But they escape, and the group — now reunited except for Alicia and Chris — continue on their way. There’s a moment when Strand locks a door to keep zombies from following them and Madison looks at him, quite impressed. “Who are you?” What she’s really thinking is probably: Would you be a trade up from Travis? Apparently he would, because later he suggests they all go west to his home, where he’s been preparing. Looks like he’s a prepper.

When they arrive at the garage, Andy shows up ready to kill Daniel, in a huge act of defiance against Travis’s attempt to keep some civility in this crazy world. But instead, Andy shocks everyone and shoots Ofelia for some reason. Travis absolutely loses it and goes all Rick Grimes on Andy, which may be the first time I’ve ever actually cheered for the man.

They take off in Travis’s trusty white truck, which has been the mascot of the series since episode 1. Strand leads them to his mansion and disappears for a few minutes. At this point, I’m expecting something crazy to happen, like maybe Strand will appear with guns and just kill everyone. But instead, Strand tells Nick about his plan.

"The only way to survive a mad world is to embrace the madness." #FearTWD

“The only way to survive in a mad world is to embrace the madness,” he explains to Nick. He shows Nick a boat out in the ocean. That’s Abigail. That’s where he’s going.

After this revelation, we find out that Liza is infected. I knew someone had to go, but I suspected it was going to be Travis or maybe Chris. Instead, it’s the only person with medical knowledge. Travis offers to be the one to kill her, showing that he has strength no one knew he had. Then the gunshot rings out… As we all knew it had to at some point… And the series is over.

What did you think of the finale? Leave a comment below and let us know. If you haven’t had enough of Fear The Walking Dead and can’t quite wait for next season of The Walking Dead to premiere on the 11th, then here’s a link to the first episode of Flight 462, the web series. 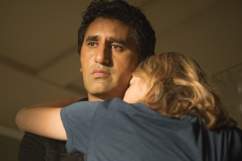 ‘Fear the Walking Dead’ Finale: The Tweets & Theories You Have to See

Read More
Entertainment, Television
Check out the review & recap from the season 1 finale of Fear the Walking Dead, "The Good Man." Who makes it out alive? And who is the mysterious lawyer?