The broadcasting world is still reeling from the news that Sir Terry Wogan has passed away at the age of 77. Here’s the woman who stood by him for over 40 years and nursed him through his final days. The famed BBC host married his sweetheart Helen Joyce in Dublin in 1965. Together the couple had four children together, tragically their daughter Vanessa died just weeks after her birth. On January 31, as news of Wogan’s death spread, Helen released a brief statement saying that she was “awfully, awfully sad but relieved his suffering his over.”

Wogan and his wife Helen pictured at Wimbledon in July 2015. (Getty)

The Guardian reports that the loss of Wogan’s daughter contributed greatly to the loss of his Catholic faith. Despite this, he remained close friends with priest Father Brian D’Arcy. In a statement to the newspaper, Fr. D’Arcy said:

Lady Helen was the love of his life. If you go into Terry Wogan’s house you won’t see a picture of any star – you’ll see pictures of his children and grandchildren festooned around the walls.

Honest to God, if there is not room for Terry Wogan in heaven, well then, the God I’ve been preaching is a way off.

He put it into practice, whether he could agree with religious institutions or not is an entirely different thing. But he had certainly a great deal of faith.

So sad that Sir Terry Wogan will no longer brighten the nation with his wit wisdom and delightful self deprecating humour. A dear friend RIP

The priest told the Guardian that Wogan’s suffering from cancer had been very bad in the days before his death. Fr. D’Arcy said, “He was quite ill at that stage and I knew it wasn’t long. We prepared for the worst, and thank God Terry got out of his suffering.” 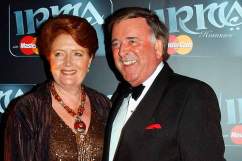 Terry & Helen Wogan: Photos of the BBC Star & His Wife Through the Years

2. They Were Both Virgins on Their Wedding Night

In a 2004 interview with the Guardian, Wogan talked about how he married Helen, then a model in the Dublin suburb of Rathmines in 1965. He also said that the couple were both virgins on their wedding night. Wogan says:

Romance is predicated on the non-fulfilment of the sexual urge. The frisson of non-fulfilment is probably more exciting than sex. I’d be hopeless, nowadays. Things are too confrontational. I could never take to promiscuity. I’m too fastidious. Anything used to put me off. Anything! Oh, God! Ugh! Ugh!’

Women think that men will take anything going. No, they won’t.’ But when he married, didn’t he hear a door slamming? Didn’t he mourn all the women that might have been? ‘No, I wouldn’t have. I could never… no… no ! I couldn’t have done. It was right for me to get married.

3. The Couple Lived in a Vast Home in Buckinghamshire ‘Surrounded by 12 Acres of Lush Greenery’

Wogan takeing a walk beside the River Thames with Helen and their children Alan and Mark, 17th March 1972. (Getty)

The couple lived in the village of Taplow, Buckinghamshire. The Daily Telegraph reported in 2008 that their home, “surrounded by 12 acres of lush greenery,” went on fire. The cause of the blaze was leaving a drier on overnight. Helen told the Telegraph, “Fortunately there is not a lot of damage. The fire brigade were brilliant. It was quite a small fire but we called them straight away and they were here very quickly.” In a separate Telegraph piece, Wogan and Helen spoke about their “vast house.” The piece reads, “Every wall is plastered with photographs and paintings; every surface filled with trinkets. The living room is dominated by a 50in television (“In our declining years, the old eyesight begins to go,” he explains), on which he and Helen like to watch sport.”

4. One of the Couple’s Daughters Owns a String of Pubs in England

Wogan with Helen holding his baby daughter Katherine in the air at their home, circa 1972. (Getty)

Two of Wogan and Helen’s children are involved in the world of food. In an interview with BookATable, Wogan said that his daughter, Katherine, and her husband own a string of pubs in the English countryside. He cited his wife as an “excellent cook” as the inspiration for Katherine and their son Mark, who owns a pizzeria, Home Slice, in London’s swanky Covent Garden.

5. Wogan Wanted One of His Wife’s Dishes to Be His Last Meal

In the BookATable interview, Wogan detailed what he would like as his last meal. The broadcaster said:

I’d have my wife’s duck in a bordelaise sauce, with her beautifully roasted potatoes. I’m not going to have it with orange sauce, I don’t like that. We have a house in the south west of France where we eat a lot of duck, obviously.

That would absolutely be my last meal… with the crispy skin. I only eat turkey for the skin, and it’s also a great bonus with the duck.

Terry & Helen Wogan: Photos of the BBC Star & His Wife Through the Years