The Young and the Restless returns on Monday with an all-new episode as Adam (Justin Hartley) is prepped for his exchange at Newman Towers while Natalie (Mara McCaffrey) expresses her safety concerns to Victor (Eric Braeden).

A Kidnapper Preps Adam for His Exchange

After being instructed by Victor to go to Spain, Adam was kidnapped straight out of the Newman Towers hallway and blanketed with a black cover. Initially, Victor — who received a ransom email demanding “the girl” in exchange for Adam — thought that the Santoris were behind the situation. In thinking so, he took Marisa (Sofia Pernas) hostage. However, he later learned from Natalie herself that she was the one the kidnappers — who are the investors to herself and Kevin’s cyber project — wanted. After hearing this, Victor released Marisa and locked Natalie inside a room.

On Friday, the kidnappers agreed to swap Adam for Natalie at Chelsea’s (Melissa Claire Egan) fashion event. However, the Genoa City PD is running the operations and are going to try keeping Natalie safe.

When Y&R returns next week, one of Adam’s kidnappers informs him that the exchange at the top of Newman Towers is about to go down.

“Time to get you cleaned up. It’s almost showtime.”

What the kidnapper doesn’t realize is that Paul (Doug Davidson) and Dylan (Steve Burton) — on behalf of the GCPD — are standing by at the Chelsea 2.0 event. They’re hoping to keep all parties safe without a hitch.

Natalie Is Concerned for Her Safety 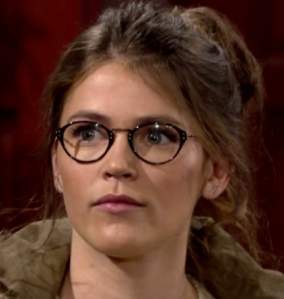 Meanwhile, Natalie — despite being kept captive — continues trying to get the glitch out of her cyber program. While Kevin (Greg Rikaart) persistently defends her against Mariah (Camryn Grimes), several others don’t trust her. After all, she not only took on other investors without informing Kevin, but also didn’t perfect the security program. Aside from Mariah, Victor and Chelsea agree that she cannot be trusted.

On Monday, Victor assures Natalie that she won’t be harmed if she follows his instructions.

“If you stick to the plan you’ll be alright.”

However, Natalie is still concerned, knowing that she’s the one who’s life is at risk with the hell-bent investors.

“That’s easy for you to say. You’re not the one about to be offered up as bait.”

Could Natalie be in on the kidnappers’ plot, or is she genuine about fixing the Internet security program and righting all her wrongs? Stay tuned.