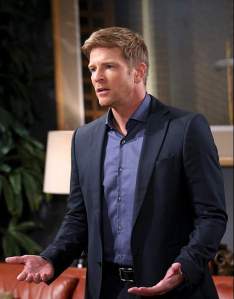 Straight out of surgery, Billy’s (Burgess Jenkins) condition continues to deteriorate. Prior to the surgery to reduce brain pressure, Dr. Neville tried offering the Abbotts an alternative solution to the invasive procedure. However, the family — aside from Ashley (Eileen Davidson) — ultimately went with the hospital’s method.

After learning of Billy’s intentions to invest in Kevin’s cyber business venture, Jack (Peter Bergman) decided he’d like to front Billy’s money for him; this way he was part of the opportunity upon waking up.

Billy Takes a Turn for the Worse 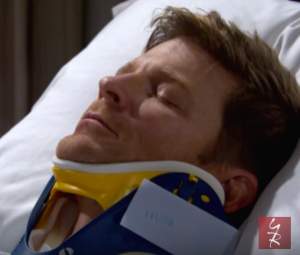 On Friday, Dr. Shelby (Terrell Tilford) informs the Abbotts that machines are keeping Billy alive; the best they can do is hope for improvement. Victoria (Amelia Heinle) now has doubts about the surgery. She thinks that maybe they should’ve gone with Dr. Neville’s (Michael E. Knight) treatment. Jill (Jess Walton) says that Billy would be okay if she didn’t leave the hospital.

Kevin, Jack and Victor argue over Kevin’s cyber venture. Jack accuses Victor of preying on other people’s liabilities; he took advantage of Billy’s predicament. Kevin reinforces that he’s considering Victor’s offer, it’s not guaranteed. Jack is offended Kevin is considering Victor. Victor thinks Jack is responsible for killing Billy’s hopes and dreams. Kevin says it’s his project and he owes neither one of them anything.

Phyllis (Gina Tognoni) calls Jack and tells him to get to the hospital; it’s Billy.

Jill, Jack and Phyllis talk about Billy’s lack of a filter. Jack tells Jill they need to prepare for the worse. This angers Jill, who says “I will never give up on my son.” Jack insists that it wouldn’t be fair to assign Billy to “a life of limbo.” Phyllis reinforces to Jill that she needs to be prepared; Jill doesn’t agree. Victoria approaches, saying that Billy told her that he’d want them to end it if something like this ever happened. Jill still disagrees.

Victor still tries getting Kevin to change his mind. Victor says he always thought Kevin was bright; he tells Kevin not to disappoint him.

Later, Dr. Shelby approaches, saying that Billy took a turn for the worst. This further dishevels Jill while the other Abbotts are emotional.

Later, Victoria tells a comatose Billy that he owes her; he shouldn’t even think about taking the easy way out. She asks God to please let him wake up. Noah shows up and peers inside the hospital room.