The Young and the Restless returned on Thursday with a brand new episode as Kevin (Greg Rikaart) officially let Victor (Eric Braeden) in on his cyber project and Noah’s (Robert Adamson) guilt over hitting Billy (Jason Thompson) persists.

Kevin Feels Guilty About His Deal With Victor 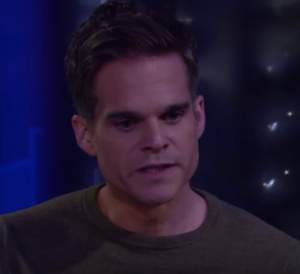 Kevin has been on the fence about whether he should take on Billy — with Jack (Peter Bergman) on his behalf — or Victor. Prior to getting assaulted and ran over, Billy was keen on buying into Kevin’s cyber project. However, Kevin — knowing Billy’s troublesome track record — politely declined. A few weeks later, Billy — on the brink of turning his life around — finally convinced Kevin to take on his money; to the tune of two million.

With no money in hand, Kevin pulled back his offer, but later left it open upon finding out about Billy’s predicament. Jack was ready to invest on Billy’s behalf when Victor got wind of the project. Since then Kevin has been undecided on what to do. In Wednesday’s episode, Kevin told Victor that he’s ready to make a deal as the two shook hands.

On Thursday, Kevin is remorseful to Mariah (Camryn Grimes) about what he’s done during such a tough time.

“I went right from Billy’s bedside to Victor’s office.”

Mariah questions him on his decision.

“You closed the deal with Victor?”

Kevin acknowledges the deal. Billy’s ghost shows up, calling Kevin “a tool” for doing it before his body’s even cold.

Later, Victor wants to see all the research on Kevin’s cyber project. Kevin is hesitant to show him anything because he may have done some illegal stuff. Victor says he wouldn’t report him.

Noah is Ready to Make a Confession 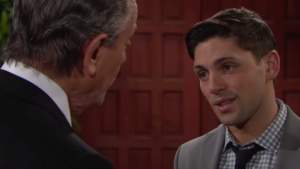 Pictured left to right, Noah and Victor in Thursday’s Y&R episode. Noah appears to be on the brink of a confession. (CBS Screenshot)

Noah hasn’t had the easiest time with his emotions lately. First, he gets his heart broken by Marisa (Sofia Pernas) when she chooses Luca (Miles Gaston Villanueva). Then — as soon as he’s on board with Adam and Victor against her and the Santoris — he finds himself hiding from the law after backing his car over an assaulted Billy.

Victor and Marisa have been adamant about deterring Noah from reporting himself. On Wednesday, he picked Adam’s (Justin Hartley) brain on how he dealt with Delia’s (Sophie Pollono) death.

However, as Billy’s help condition has deteriorated to him being pulled off life support, he’ll on the verge of a confession. On Wednesday, Victor tells Noah that Billy’s death was going to happen sooner or later; Noah says it makes him a killer. Noah insists he must come clean about his accident.

Victor tells him that he’s on his own if he reports what he did.

Victor — with Billy’s ghost standing by — says that Noah will hurt a lot of people if he comes forward to the cops.

Victor — knowing a confession would be detrimental to Noah’s future — once again insists he remain mum.

“How would that help Victoria, Noah?”

After Noah’s exit, Victor tells himself that Billy was a drunk and degenerate, but he’s happy he gave him his grandkids.

Later, Mariah tells Noah that he can’t stay quiet about whatever’s bothering him. Later, it pains him to hear her and Kevin say that someone will pay for what they did to Billy.

Later, Chelsea (Melissa Claire Egan) wants to know where Adam (Justin Hartley) went on his business trip because she wants him home with the kids. He won’t tell her. They realize that Adam never showed up to his location. 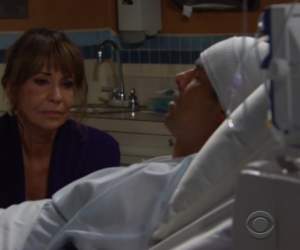 Pictured left to right, Jill and Billy in Thursday’s B&B episode. Billy shows signs of life after being pulled off machines. (CBS Screenshot)

Jack, Jill (Jess Walton) and Phyllis (Gina Tognoni) stand by Billy’s hospital bed after he’s been taken off the machines. Expecting Billy to die shortly, Jack speaks to them about it; the two are extremely sad.

Billy’s wondering if he’s in some sort of limbo. Jack tells Victoria that he wouldn’t of turned the machines off if he thought Billy could fight. Billy’s emotional seeing Victoria in pain. Jack appears extremely distraught. Billy tells Jack — who feels guilty for pulling him off life support — to listen to Phyllis’ (Gina Tognoni) reasoning.

Ashley (Eileen Davidson) consoles Jill (Jess Walton), saying that Billy knows how much she cares about him. Billy says it’s going to be okay; he loves her. Billy says that she doesn’t have to be let down by him anymore.

Jill tells Phyllis that she wonders if Katherine (Jeanne Cooper) will be in heaven to rip Billy up for being a fool. Meanwhile, Jack and Ashley (Eileen Davidson) cry over Billy. Jack says he feels a fist around his heart because Billy never had a chance to set it right.

Delia catches Billy’s attention by saying, “Daddy.” He smiles while watching the Abbotts sit near his hospital bed. Delia tells Billy he should go back and fix his wrongs; she says it’s not too late. They say “I love you” to each other.

Later, The doctor notices brain activity. Victoria says, “Billy’s coming back to us.”