The Young and the Restless returned on Tuesday with an all-new episode as Dr. Anderson (Elizabeth Bogush) pushed Nick (Joshua Morrow) to have Sage (Kelly Sullivan) committed while Phyllis (Gina Tognoni) explained to Natalie (Mara McCaffrey) why Adam (Justin Hartley) was kidnapped. 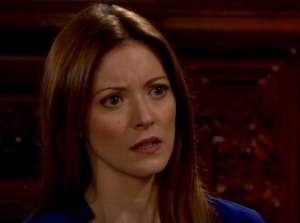 Dr. Anderson — pictured above in Tuesday’s Y&R episode — wants Sage arrested after the latter slaps her in the face. (CBS Screenshot)

Dr. Anderson continues trying to pry into Nick and Sage’s life. From the beginning, she’s continuously urged Nick — who’s rekindled his romance with Sage — to stay away from his wife. Dr. Anderson stated that if he didn’t keep away from Sage, she could end up as one of her patients. Nick — who was starting to buy into Dr. Anderson’s advice, was eventually convinced by Sage that she had an ulterior motive. On Monday, Sage and Nick came up with a plan to deceive Dr. Anderson in order to get to the root of her motive. Nick approached her pretending he was worried about Sage.

On Tuesday, Dr. Anderson continues trying to convince Nick to have Sage institutionalized. When Sage arrives, Nick tells her they need to speak. Sage refuses to and calls him a traitor. In the process, she slaps him in the face. Soon after, Sage slaps Dr. Anderson in the face as well. Dr. Anderson then calls the police and says that she’s getting Sage arrested.

Later, Sage queries Dr. Anderson about how long she’s been interested in her husband. Upon the police’s arrival, Sage says they should arrest her. Meanwhile, Mariah (Camryn Grimes) tries assuring Sharon (Sharon Case) that everything with Dylan will be okay, and she shouldn’t worry about his new role as a police detective.

When Sharon brings up Dr. Anderson’s concerns about Sage, Mariah doesn’t think Sharon should trust her advice. Nonetheless, Sharon isn’t willing to take any risks when it comes to baby Sully.

At the police station, Paui (Doug Davidson) informs Nick that Sage will be kept until her arraignment in the morning. Dr. Anderson arrives, saying herself and Nick should work as a team. Sage angrily stares at them. 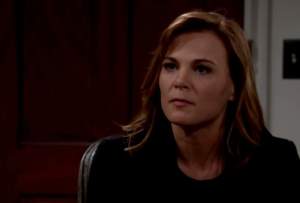 Phyllis — pictured in Tuesday’s Y&R episode — recruits Natalie in her efforts to get revenge on Victor. (CBS Screenshot)

Meanwhile, Victor’s (Eric Braeden) request for Adam to go to Spain for business opened up a pandora’s box of deception. Adam — who was acting as a double agent before getting kidnapped by Victor — was kidnapped right outside his Newman Towers residence. The situation became more complex, as Natalie showed up, admitting to Kevin (Greg Rikaart) that she not only took on her own investors, but also that the cyber program wasn’t fully functional. On Monday, Natalie was eventually used as bait in a trade to get Adam back. Fortunately, she escaped the kidnapper when Dylan (Steve Burton) came to her aid. However, Phyllis prevented her from leaving the premises.

On Tuesday, Phyllis informs Natalie that she’s “the other investor that stepped in during Kevin’s delay,” according to Celeb Dirty Laundry. Natalie wonders why she decided to kidnap Adam. Phyllis explains that it was just a business decision. Phyllis then tells Natalie that there’s a new plan: For Natalie to make up a bogus computer program and take Victor’s investment dollars. This concerns Natalia, who’ll be curious as to why Phyllis is so keen on tricking Victor. Phyllis says that she’s doing this to assist Billy (Jason Thompson) and will urge Natalie to help her out.

Later, Phyllis expresses her concern about Kevin’s knowledge of the situation. However, Natalie insists that she’d prefer it that way. Later, Natalie tells Kevin that they can still be partners as long as he doesn’t tell Victor. Mariah disagrees with the plan. Later, Phyllis goes to the hospital to let Billy know that the plan is back on. Adam and Chelsea (Melissa Claire Egan) promise to always support each other. They make love.