The Young and the Restless returned on Thursday with an all-new episode as Victor (Eric Braeden) pulled out of the cyber deal with Kevin (Greg Rikaart) while Billy (Jason Thompson) spoke to Paul (Doug Davidson) about his assault.

Read on for Y&R’s Thursday, January 21, 2016 recap and scroll down to click “Next Page” for spoilers on Natalie’s bloodline.

Victor Pulls Out of His Investment Deal With Kevin 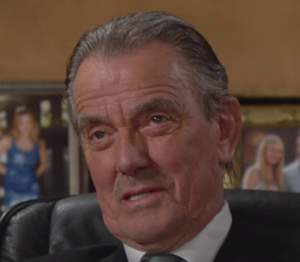 After getting wind that Kevin overcharged him by a million, Victor wants out of the cyber project. (CBS Screenshot)

Kevin believes Victor would take and trade Natalie. Mariah warns him that he’ll lose two million dollars if he confronts Victor. She says they “can’t afford to poke the bear.” He sticks up for Natalie, which infuriates Mariah. She don’t trust her. Kevin thinks he’s the reason Natalie’s in trouble.

Abby (Melissa Ordway) tries bonding with Max (Jared Breeze) by bringing him an unreleased game, but he throws it back to her. Abby is discouraged by Max’s behavior. Stitch (Sean Carrington) is appreciative, telling her he just needs time. Abby goes into deep thought about Stitch’s love; she’s concerned. Stitch continues trying to cheer his son up, who still insists Abby “is not so great.” Stitch says she is. She’s just not his mother.

Noah wants to know from Marisa (Sofia Pernas) if Luca (Miles Gaston Villanueva) hit Billy. Abby informs them that Paul is speaking to Billy about his accident. Luca apologizes to Noah (Robert Adamson) about how he acted. Marisa thanks him for it. Luca informs her that his father wants him to go to Spain and bring Marisa with him.

Paul shows up at the hospital to speak to Billy. He tells Victoria (Amelia Heinle) he’s okay to. Billy explains — in detail — the beating he took from Gill the bookie’s henchmen. Billy’s unaware that he was hit by a car after his assault.

Dylan (Steve Burton) tells Victor to use the police as an asset to retrieve Adam (Justin Hartley).

Kevin accuses Victor of taking Natalie. He tells Dylan to do something since he’s a cop. Later, Victor tells Dylan if their plan doesn’t work out, his “ass is on the line.” Dylan agrees.

Noah approaches Paul to see if he has any idea who hit Billy. Paul says “whoever did this is going to be put in a cage.” This scares Noah.

Billy wants to talk to Kevin and Mariah about the investment. Victoria doesn’t think it’s a good idea. He says, “It’s too late, isn’t it? We all lost out.”

Victor tells Kevin and Mariah that since they raised the price an extra million, he’s out of the deal. Kevin informs Noah that Victor screwed himself and Mariah out of a deal. Noah tells them that Billy’s awake.

Victoria informs Abby that herself and Billy are getting back together. Kevin tells Billy he sold the idea to Victor. He says he understands due to the circumstances, but he don’t think he made the right decision. Mariah informs him that Victor already pushed them aside.

Paul tells Paul he’s got a lead on a ransom note from Victor. It’s because a business deal went south. Paul is pissed that Dylan went outside the law. Dylan says he’s trying to make sure Adam, the girl, and especially Victor don’t get hurt.

Abby is happy to hear that Max enjoyed the gave.