The Young and the Restless returns on Tuesday with an all-new episode as Nick (Joshua Morrow) follows through with his plan to fool Dr. Anderson (Elizabeth Bogush) while Phyllis (Gina Tognoni) asks Natalie (Mara McCaffrey) to work with her. 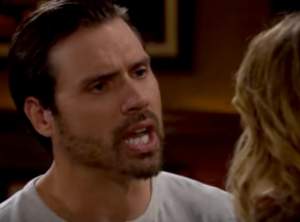 Nick — pictured above in Tuesday’s Y&R episode — endures a slap to the face from Sage to convince Dr. Anderson of the legitimacy of their conversation. (CBS Screenshot)

For some time, Dr. Anderson has been trying to split up Nick and Sage. Unbeknownst to Nick, Sandy is plotting against him due to a Newman Ranch diving accident that took place when the two were teens. The dramatic incident not only lost Sandy a child — that was supposedly Nick’s — but also the ability to get pregnant. Nick has no idea that she was that girl.

Sage (Kelly Sullivan) has started to catch on to Dr. Anderson’s ways. She’s well aware that Sandy has been trying to keep her away from Sully and drive a wedge between herself and Nick. On Monday, Sage and Nick devised a plan to catch Dr. Anderson in her deceitful ways, as Nick pretended to side with her.

On Tuesday, Sage — playing the part of the betrayed wife — slaps Nick while he pretends to calm her down.

“We should got outta here so we can ta–”

Sage — committed to the task at hand — screams at Nick right in front of Dr. Anderson. She seems to be buying their acting.

“No, I don’t wanna get outta here Nick because you’re a traitor.”

Phyllis Wants to Work With Natalie 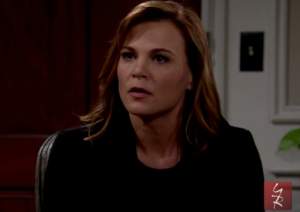 Phyllis — pictured above in Tuesday’s Y&R episode — recruits Natalie for her mission against Victor. (CBS Screenshot)

Meanwhile, the plan to get Adam back from the kidnapper at the Chelsea 2.0 fashion event seemed to go off without almost any hitches. Adam was traded for Natalie, who was decked out in bridal wear with a tracking bracelet. Once Natalie was taken, she fought back against the kidnapper, buying her just enough time for Dylan (Steve Burton) to come to her rescue. However, she soon tried to escape, but was stopped by Phyllis, who’s evidently the mastermind behind the kidnapping. Phyllis’s disdain for Victor (Eric Braeden) is so strong that she seemingly wanted nothing more than to ruin his cyber project opportunity.

On Tuesday, Nikki (Melody Thomas Scott) makes her thoughts about Natalie to Victor crystal clear; she wants her gone.

“I hope she is far away and has taken her drama with her.”

Later, Natalie — who was prevented from leaving the area — queries Phyllis on what she wants from her.

“You want me to work for you?”

In response, Phyllis informs Natalie that she would like them to work together.