Tension was in the air when The Young and the Restless returned on Wednesday for an all-new episode as Billy’s (Burgess Jenkins) method of surgery was determined and Adam (Justin Hartley) warned Chelsea (Melissa Egan Claire) to stay away from Marisa (Sofia Pernas).

Read on for the Wednesday, January 6, 2016 Y&R recap  and click on “Next Page” below for the Thursday spoilers involving Sage and Dr. Anderson. 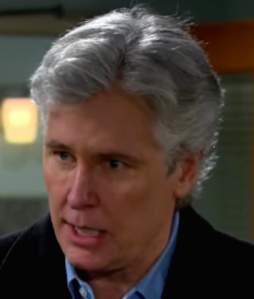 Dr. Neville butts heads with the hospital regarding Billy’s method of treatment on Thursday’s Y&R episode

The hospital doctor disagrees with Dr. Neville’s (Michael E. Knight) approach to treating Billy. Neville insists Billy doesn’t have to be cut open for his life to be saved. Neville admits he looked into Billy’s records. Neville storms off. Stitch (Sean Carrington) and Abby (Melissa Ordway) show up. Stitch wants to look at Billy’s chart. Abby questions Ashley’s (Eileen Davidson) loyalty to Neville’s approach. Ashley says she isn’t looking to push an agenda; her and Neville are just colleagues.

Later, Neville insists to Stitch that he can get results. Stitch says that one clinical trial isn’t sufficient enough to take such a risk. Neville slips about Ashley needing treatment, but saves the secret by saying that he meant their business partnership. Abby asks Ashley why she looks so warn out. She blames it on Billy’s situation.

Stitch and Ashley disagree over how Billy’s brain pressure should be treated. Stitch and Abby again notice Ashley’s closeness to Neville. Ashley tells them that she must be productive before Billy’s surgery and leaves. Meanwhile, Jack (Peter Bergman) tells Abby and Stitch that the family must stick together to overcome this. Later, Jack and Phyllis (Gina Tognoni) agree that despite Billy having a 50/50 chance at survival, they must hold onto hope.

Later, Neville apologizes to Ashley for storming out of the hospital. He says that he doesn’t understand why the doctors would want to be so intrusive on Billy. Ashley understands his frustrations and reinforces that she’s willing to participate in his treatment. Abby and Stitch are skeptical about Neville and her Ashley’s relationship. However, they notice how well the two get along.

Kevin Came Clean to Paul About His Involvement With Billy 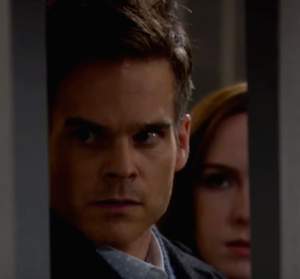 Meanwhile, Paul (Doug Davidson) tells Jack he doesn’t have anything to arrest Gill the bookie for. With Kevin (Greg Rikaart) and Mariah (Camryn Grimes) peering through Paul’s office door, Phyllis and Jack tell Paul about Billy’s bet. Paul questions why Billy would want to place such a high wager. Kevin interrupts, admitting that Billy wanted money to invest in his project. Kevin says he’s doing everything he can to find out who ran over Billy. Jack tells Kevin that he owes him more than that.

Kevin informs Jack that Billy’s money was supposed to go towards a new tech idea that he cannot fully disclose. Kevin admits that he told Billy that the opportunity wouldn’t be there if he didn’t receive the money immediately.

Later, Paul phones Stitch, saying he needs to urgently speak to him. Upon arriving at the police station, Stitch is happy to see his son Max there. After hugging him, his son points to Abby and says she killed his mother.

Later, Jack and Victoria both acknowledge that they screwed up with Billy. Jack says that he’s hopeful he can make it up to him when he wakes. Victor (Eric Braeden) shows up to Jack and Phyllis’ dismay. Victoria (Amelia Heinle) tells him he shouldn’t be there. Victoria informs Victor about Billy’s investment circumstances and accuses him of selfishly wanting to know more about the project.

Later, Mariah tells Kevin he was dense for volunteering info to Paul. Mariah says he cannot just blurt out details on such an opportunistic project. They agree that they still need an investor, but will bank on Billy recovering; they owe it to him.

Meanwhile, Jack tells Phyllis that he’s going to give Kevin Billy’s investment money so that the opportunity will be there for him when he recovers.

Adam Warned Chelsea to Stay Away from Marisa 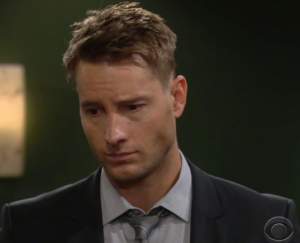 Unbeknownst to Chelsea, Adam considers his wife’s employment of Marisa a liability to his plan. (CBS Screenshot)

Adam and Chelsea lay blanketed and naked on their couch. She wants them to work on another baby. Adam appears undecided. Later, Chelsea offers Noah and Marisa an opportunity to work for her. Noah politely declines, but Marisa accepts. Luca (Miles Gaston Villanueva) approaches, saying that Marisa and himself have work to do. A short while later, Chelsea tells Adam about Marisa’s employment; Adam says she needs to stay away from her. Chelsea doesn’t agree. She thinks there’s more to the story and demands to know about it. Adam merely says that Marisa and Luca won’t be around for long.

At Newman Enterprises, Chelsea, alongside Adam, requests that Victor cut her ties with Newman Enterprises; he says it’s not going to happen. Victor explains that the relationship between Newman and Chelsea 2.0 is mutually beneficial; she disagrees. They come to terms on her renting space, but Chelsea still says that Newman is responsible for Jabot’s fall. Victor insists that “Billy boy” is.

Luca informs Adam that Marisa will be his informant for taking down his own father. Adam balks at first, but is on board with it.

Noah and Marisa speak to Victor in his office. Victor tells Marisa that he doesn’t want her there. She says that whether he likes it or not, she’s involved in Noah’s predicament. Victor informs them that the police found tire tracks. Noah says that Marisa helped him get new tires. Later, Luca approaches Noah to speak. Meanwhile, Victor privately tells Marisa that she’s going to hurt either Noah or Luca; but it won’t be his grandson.

Luca wants to know what Marisa was talking to Noah about. She insists it’s nothing, just Victor being Victor. She reminds him to not trust Adam. Luca tells Marisa he needs her help. He wants info on his family. Marisa informs him that the Santoris were Marco’s only backer. Luca reassures her that no one will ever know she supplied him with that info.