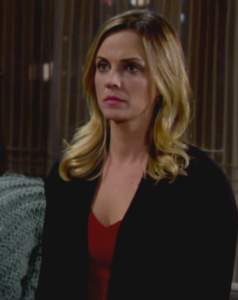 Major conflict is the theme when The Young and the Restless returns on Thursday, January 7, 2016 with a brand new installment as Sage (Kelly Sullivan) puts Dr. Anderson (Elizabeth Bogush) in her place and Phyllis goes face-to-face with Victor once again. 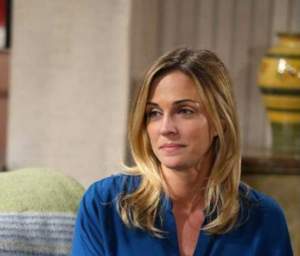 Sage tells Dr. Anderson exactly what she thinks of her on Thursday’s Y&R episode. (CBS Screenshot)

Nick (Joshua Morrow) and Sage continue moving forward on redeveloping their relationship. After several failed attempts at getting Sage to come home, he’s finally making some leeway. Fans — and Adam (Justin Hartley) — witnessed a heavy make out session between the two. Nick also moved into the penthouse with her. Despite this, Dr. Anderson still continues trying to tear them apart as revenge against Nick for a teen diving accident at the Newman Ranch.

On Thursday, Dr. Anderson “will finally go one step too far,” according to Celeb Dirty Laundry. In the episode, Sage gets angry at Dr. Anderson for prying into her and Nick’s business. She tells her that she “isn’t her therapist and “isn’t her friend.”

The site reported that Sage’s message won’t go over very well with Dr. Anderson. Nonetheless, Dr. Anderson evidently needs a Plan B for her plot of deceit.

Phyllis Faces Off Against Victor Again

Phyllis — who’s been a Billy Abbott advocate as of late — goes toe-to-toe with a familiar enemy on Thursday’s Y&R episode. (CBS Screenshot)

Meanwhile, Phyllis has been the voice of reason for most matters concerning Billy. She’s even taken his side against her own husband, Jack (Peter Bergman). On Thursday, she goes head-to-head with someone she’s no stranger to; Victor. Phyllis — who’s gone to war for Billy as of late — tells Victor that she isn’t too thrilled with whatever scheme he has going.

Celeb Dirty Laundry reported that their latest battle is over Victor’s enjoyment watching Jack and her “squirm a little.” This could be related to new business opportunity that Victor wants to be involved in. Perhaps he will want to invest in Dr. Neville’s (Michael E. Knight) treatment? The neurologist — who’s method restored Hilary’s (Mishael Morgan) health — now has the futures of two Abbotts in his hands; Billy (Burgess Jenkins) and Ashley (Eileen Davidson).

What Victor doesn’t realize is that his son, Adam and Luca (Miles Gaston Villanueva) are in the midst of attempting a takeover.