The Young and the Restless returns on Friday with an all-new episode as Billy (Jason Thompson) isn’t sure if he’s ready to marry Victoria (Amelia Heinle) while Phyllis (Gina Tognoni) pushes him to back out of their plot against Victor (Eric Braeden).

Read on for Y&R’s Friday, February 12, 2016 spoilers and be sure to check back for after-show recaps.

Phyllis Urges Billy to Back Out of Their Plot Against Victor 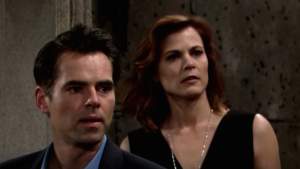 Pictured from left to right, Billy and Phyllis. The latter urges the former to reconsider his part in seeking revenge on Victor. (CBS Screenshot)

Just when Y&R fans thought that Billy was ready to turn a new leaf, he’s up to his usual antics; trying to take down Victor. Not too long ago, the Abbotts were preparing for the worse and took Billy off life support. Miraculously, he’s made a full recovery. However, the gift of life evidently wouldn’t be as gratifying without revenge on his father-in-law. In Thursday’s episode, Victoria — after making love to Billy — expressed her interest in getting married to him again.

On Friday, Billy mulls over whether he’s worthy of tying the knot to Victoria. Meanwhile, Phyllis — the mastermind in the plot against Victor — urges Billy to “forget about their revenge plot,” according to Celeb Dirty Laundry. Billy insists that he stay on board and can address marriage with Victoria once they execute their plan.

However, Billy and Phyllis’s plan now involves Summer (Hunter King), who Victor instructed to watch over Natalie (Mara McCaffrey). Billy and Phyllis think that they can utilize Summer to their advantage. They’ll “want to make Natalie look like a con artist. If Summer finds out that Natalie is a fraud, she’ll quickly pass along the news to Victor,” stated the site. 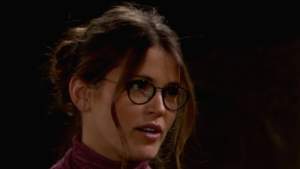 Natalie — pictured in Friday’s Y&R episode — continues acting as though she can’t figure out the cyber project glitches. (CBS Screenshot)

In response to Natalie’s insufficient work on the cyber project, Victor gets angry and ditches Natalie, allowing them to work with her “without having to keep it a secret.”

Later, Phyllis puts on an act for Victor to see as she states that she doesn’t trust Natalie and doesn’t think it’s a good idea for Summer to be around her. Victor insists that Summer watching over Natalie is what he wants. In response, Phyllis leaves without any resistance; a concern to Victor.

Billy tells Natalie that he and Phyllis would like her to dupe Summer into believing she’s a fraud. Natalie shoots Billy a troublesome look and jokes that she may be one.

Will Natalie be able to pull off her part in taking down Victor, or will she be found out? Also, will Victoria catch Billy scheming against her father yet again and if so, what will the consequences be? Stay tuned.