Daisy Lewellyn lost her battle with a rare liver cancer on April 8. She was only 36 years old.

Daisy Lewellyn died on Friday at the age of 36. The Blood, Sweat and Heels star lost her battle with a rare liver cancer. She revealed the diagnosis in February 2015 during an interview with Madame Noir. She described her disease as cancer of the bile ducts in the liver:

It’s a super rare type of cancer. No one gets it, especially at my age with my health and my lifestyle. It’s kind of unheard of. I was diagnosed at 34. It was kind of shocking. But also when I was diagnosed, I remember some of my immediate thoughts being like, ‘Well you know what? I’m not afraid to die.’

Lewellyn Was Not Afraid to Die

Although she wasn’t afraid to die, Lewellyn clarified that she didn’t want to die. She made her peace with dying early on.

It wasn’t like I wanted to die and it wasn’t like I didn’t want to live because I absolutely love my life and I’ve always loved my life, but they told me it was stage three cancer. I was like, ‘Well, if it’s my time to go, I’m okay with it.’ But then I had to start thinking about other people in my life and it’s not that easy just to decide just like that. I realized that it was hard for my family and my friends. I’m not afraid to go to heaven, but I would like to stay on earth if I can. If it’s my time to go, then I can say that I had a great life.

Her Mother Struggled With the News

Lewellyn’s father and mother supported her throughout her illness. (Instagram/@daisylewellyn)

Her family and friends gathered for a prayer vigil for Lewellyn during the second season of Blood, Sweat and Tears. The reality star stayed calm when she learned the news, but her mother was not so relaxed about the situation.

“My mother was there with me and she completely lost it as any mother would. Me knowing that my mom was having a hard time allowed me to feel a little more stable in my emotions,” the reality star told Madame Noire.

Her makeup artist first noticed something was wrong while Lewellyn was promoting the first season of Blood, Sweat and Heels. The cancer also caused her to be tired a lot.

“I was doing press for season one and my makeup artists noticed that my eyes had this crazy green,” she told OK! Magazine (via Bravo). “I assumed I was just tired – but it turned out I had a tumor in my bile duct. It’s super rare.”

The style expert hoped opening up about her illness would leave a positive impact on others. Her wish was to inspire at least one person with her story.

“I have cancer – cancer doesn’t have me. Every day comes with its challenges, but that doesn’t stop me from celebrating what I have in my life,” she said. “I wanted to turn this tragedy into triumph by sharing my story in hopes that even one person could feel inspired.” 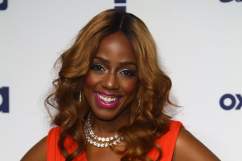 Read More
TV
Daisy Lewellyn died on Friday at age of 36. Find out why she died so young.