Who died in The Walking Dead finale? (Gene Page/AMC)

The finale for season 6 of The Walking Dead was Sunday night, but a lot of questions were left unanswered. One in particular was hugely important: who died at the end of the finale? After you read this post, take a poll at the end and tell us what you think.

Here’s what we know so far. This does not include any comic book spoilers, but it does include spoilers for the Season 6 finale itself.

Fans were on edge throughout The Walking Dead finale. Carol and Morgan were off on their own, safe. As usual, Carol leaving the group ended up being the best thing that could have happened to her. Morgan broke his “I will not kill anyone” vow in order to save her life. Like Carol said, if you care for someone, you have to end up killing people. After Morgan sacrificed his no-kill vow so Carol could live, they were saved by a group of post-apocalyptic knights. We know that Morgan and Carol are safe.

But in the end, Negan had corralled a group of our favorite characters and was threatening to beat one of them to death. Rick, Abraham, Daryl, Sasha, Carl, Rosita, Eugene, Glenn, Michonne (we keep forgetting her, maybe because we really don’t want her to go), Aaron, and Maggie were in the group whose lives were threatened. At the end, Negan chose one person and began beating him/her. But the camera faded to black before we could find out their identity.

Fans were not happy about this cliffhanger, which in forums was listed as one of their worst fears about the finale.

So who was it? Who did Negan start beating to death? Need to see that last scene again to see if your theory has a chance? Here it is:

We are pretty sure that Carl was safe, because Negan made his pick and said something about cutting out Carl’s eye if anyone interfered. It wasn’t Carl. Some people who are positive it was Glenn point to this Tumblr post that slowed down the audio and added what they think were the “closed caption” words not shown in actual closed captioning. We have no idea if this is accurate, however. Some people debate the accuracy and say that certain captions attributed to one character were actually said by Negan, and were completely different words.

There’s a widespread theory circulating that the writers themselves don’t even know. The theory is that perhaps they wrote the episode before a final decision was even made about who’s going to die in season 7. This idea has some fans pretty upset, and you can read about it in this memes story.

Who do you think died in the finale? Let us know in this poll: 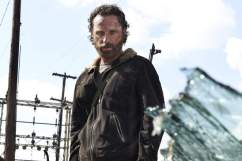 When Does ‘The Walking Dead’ Return for Season 7?