Now that Hillary Clinton has enough delegates for the Democratic nomination and the support of President Barack Obama, more of her fans can go public. In a sketch on Late Night with Seth Meyers, the comedian showed that Clinton even has some younger supporters who are finally ready to reveal, “I’m with her.”

Earlier in the week, Meyers also took a “closer look” at Clinton’s wins in California, where there were odd polling locations. He also looked at some of the criticisms of Clinton’s voice. 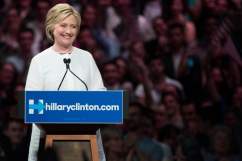