This week, Marvel‘s lone Star Wars release continues the adventures of Poe Dameron in Star Wars: Poe Dameron #6, which hits stores on September 7. The team of writer Charles Soule and artist Phil Noto continue to do an excellent job at bringing the adventures of the Resistance’s best pilot to life, even if Poe himself finds it easier to get into jams than out of them.

Poe’s mission to find Lor San Tekka has taken him to Megalox Beta, a massive prison where Grakkus the Hutt is being held. Grakkus might have some information on where San Teka is, so Poe and Black Squadron were there to meet him and break Grakkus out. Unfortunately, the First Order’s Agent Terex is there too. Grakkus pits Poe and Terex in a contest. Whoever can break him out of the prison first gets the info on San Tekka.

While the series has Poe’s name on the cover, BB-8 has been a star, too. Poe’s trusty droid is in trouble himself, as #5 ended with him going face-to-face with a very tall, dangerous droid on the satellite above the prison world’s surface. Sure, we all know BB-8 and Poe get out of this mess alive because they were in The Force Awakens, but we have to find out how they survive.

Click here to read a four-page preview of #6 via Previews.

Also this week, Marvel is releasing a hardcover edition of Henry Gilroy and Jan Duursema’s 2002 adaptation of Attack of the Clones that was originally published by Dark Horse; and a hardcover collection of #1-12 of the current Star Wars series. 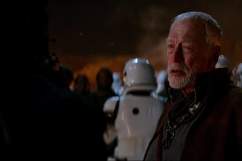