No, Animal Planet is not airing the 1971 Disney comedy The Million Dollar Duck this week. The network is really airing a new documentary called The Million Dollar Duck that’s about the Federal Duck Stamp Art Contest, the only juried art contest held by the U.S. government. The 71-minute documentary debuts at 9 p.m. ET on Wednesday, September 14. Read on to learn more about the film.

The Million Dollar Duck debuted in January at the Slamdance Film Festival, where it won the top documentary award. It was directed by Brian Davis, whose other work includes 2005’s Comic and 2011’s A Path to Honor. His film follows six artists who enter in the contest.

The Federal Duck Stamp Program began with the Migratory Bird Hunting Stamp Act, which President Franklin D. Roosevelt signed in 1934 to protect the wetlands that are important to migratory waterfowl. It requires all waterfowl hunters 16 and over to buy a stamp. Since 1934, the program has raised $800 million to save 5.7 million acres of wetlands.

Each year, a contest is held to decide what design the government will use on the stamp. This year’s contest wrapped up on September 10 in Philadelphia and the winner was no surprise to those who follow the contest. James Hautman of Chaska, Minnesota won for the fifth time, tying his brother Joseph for the most wins ever. Their other brother, Robert, came in third. The three bothers have won a combined 12 contests.

“If there’s more than one of them in the contest, it’s a scary year,” one artist says in the trailer for Million Dollar Duck. 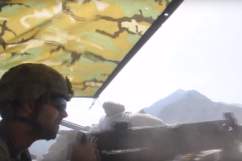 ‘Taking Fire’: What Time & Channel Does It Air On?

Read More
TV
The Million Dollar Duck is a new documentary that's airing on Animal Planet Wednesday night. Click here to learn about the show and when it airs.