While leaving Max Maras fashion show in Milan, Gigi Hadid and her sister Bella Hadid were disrupted by the infamous Ukrainian prankster Vitalii Sediuk. This is the same prankster who hit Brad Pitt at the Maleficent premiere in 2014 and tried to kiss Will Smith in 2012. “How dare that idiot thinks he has the right to man-handle a complete stranger,” Gigi later tweeted.

In the video, Sediuk is seen surprising Gigi from behind and lifting her up. Bella tries to help, but Gigi elbows Sediuk in the face. The prankster then runs off. TMZ identified the man as Sediuk.

“Who the f**k are you, you piece of s**t,” Hadid is heard yelling while security tries to hold her back. Before the incident, she was happily taking selfies with fans.

After the show, Hadid didn’t mention it on Isntagram, just posting a photo of herself with her sister. “Had to hold back tears of pride & joy watching my beautiful lil sis open the @fendi show today!!!!!!!! Thank you so much for having me,” she wrote.

Had to hold back tears of pride & joy watching my beautiful lil sis open the @fendi show today!!!!!!!! Thank you so much for having me @karllagerfeld @amandaharlech @pg_dmcasting ??

Gigi later took to Twitter to blast a media outlet for writing that she “aggressively lashed out” at Sediuk.

and had EVERY RIGHT to defend myself. How dare that idiot thinks he has the right to man-handle a complete stranger. He ran quick tho ????

As for Sediuk, he issued the following statement to The Hollywood Reporter:

While I consider Gigi Hadid beautiful, she and her friend Kendall Jenner have nothing to do with high fashion. By doing this, I encourage the fashion industry to put true talents on the runway and Vogue covers instead of well-connected cute girls from Instagram. You can call it a manifest or a protest. This is also a wake-up call for Anna Wintour, who turned Vogue into a tabloid by putting Kardashians and other similar celebrities on a cover of a well-respected magazine.”

On September 27, Hadid sat down for an interview with Lenny Letter’s Lena Dunham and defended her response to the bizarre attack.

Honestly, I felt I was in danger, and I had every right to react the way I did. If anything, I want girls to see the video and know that they have the right to fight back, too, if put in a similar situation. Practicing self-defense is important so that when you’re in the moment, reacting from muscle memory comes more naturally to you than freezing up. Confidence in your own ability to defend yourself comes with educating yourself about it, and is a massive advantage when in an unsafe situation. 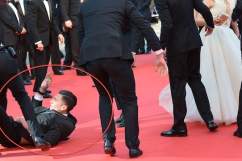