Sediuk being detained after attempting to crawl under America Ferrera’s dress on May 16 at Cannes. (Getty)

Ukrainian TV reporter Vitalli Sediuk is used to spending a lot of time in handcuffs. The 25-year-old “prankster” has been forcibly removed from red carpets around the world for his “pranks,” which are more like assaults. On May 28 Sediuk was arrested in Los Angeles after witnesses say he jumped a barrier, hugged Brad Pitt, and then struck his face.

1. He Was Arrested After Striking Brad Pitt at the ‘Maleficent’ Premiere

Wednesday night, at the Los Angeles premiere of Angelina Jolie’s new film Maleficent, dozens of paparazzi and spectators watched as Sediuk jumped over a barrier and embraced Pitt. Instantly six or seven men were on top of Sediuk, and he was arrested on battery charges. The celebrity couple went about their red carpet schmoozing, but ABC News reported that Jolie was visibly upset by the incident.

Above you can watch a newscast about the incident.

2. He Tried to Kiss Will Smith & Got Slapped for It

In May 2012, as Will Smith attended the Moscow premiere of Men in Black 3, a gracious hug with Sediuk quickly went sour when the reporter kissed him first on the cheek, and then attempted to kiss him on the lips. Smith, irate at this invasive move, slapped Sediuk across the face as he walked away.

You can watch the crazy video above.

3. At the Grammys He Tried to Accept an Award for Adele

Sediuk made headlines and even got an interview on E!, which you can watch above, when in February 2013 he crashed the Grammy awards. Sediuk suddenly appeared on stage wearing a tuxedo and stood next to a very confused Jennifer Lopez while she presented an award to Adele. He was quickly removed from stage after he tried to speak.

In a move that seems to be one of his favorites, at the 2014 Screen Actors Guild awards, and at the 2014 Santa Barbara International Film Festival, Sediuk got on his knees and hugged the waists of Bradley Cooper and Leonardo DiCaprio, respectively. Both took it in stride, but Cooper eventually bent down to try to pry the prankster off of him. DiCaprio just tried to laugh it off as guards and fellow actors took Sediuk away.

Above you can watch the video of DiCaprio.

5. He Tried to Climb Under America Ferrera’s Dress

Once of Sediuk’s most poorly reviewed “pranks” happened at Cannes Film Festival in May 2014. At the premiere of How to Train Your Dragon 2, Sediuk lurked around for a moment before attempting to crawl under actress America Ferrera’s billowy dress. You can watch that video above. 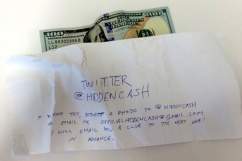