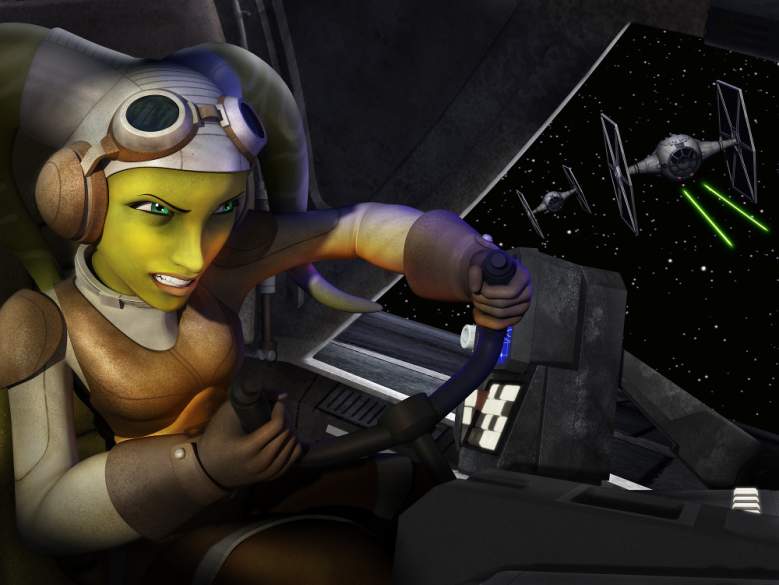 Hera has continued to rise through the ranks of the Rebellion, but in episode 5 of Star Wars Rebels Season Three, she gets to relive old times with the Ghost crew by making a supply run to Ryloth. During the Clone Wars, the Twi’lek homeworld was the site of an invasion by the Separatists, with Hera’s father, Cham Syndulla, leading the Twi’lek Resistance.

As one should expect, this isn’t going to be an easy homecoming for Hera, as the Empire took over Ryloth after the Old Republic crumbled. Hera clashed with her father during the season two episode, “Homecoming,” over how best to fight the Empire. Thankfully, that episode ended with a reconciliation between father and daughter.

It’s time to see how Hera’s latest trip to Ryloth turns out with a look at “Hera’s Heroes.”

The episode kicks off on Ryloth, with Cham and Numa, another Twi’lek fighter, being chased on Blurrgs by Scout Troopers on speeder bikes and an Imperial troop transport. Cham is surprised to hear Hera over the commlink. Rather than pick up Cham and his fellow fighter, Hera decides to attack the Imperials tracking them at first. The Imperials seem to think that shooting the Ghost is a good idea, but we know that won’t work. They quickly finish off the trooper transport, but a scout is still behind them.

Hera keeps the Ghost moving and begins lowering the front ramp, expecting Cham and his friend to be able to jump onboard. The pick-up is successful and Zeb knocks out the scout so Ezra can add that helmet to his collection.

On the Ghost, Cham has some devastating news: the Empire has taken over the entire Tann province, where Hera grew up. Cham explains that his rebels underestimated the Imperial commander, Captain Slavin. He was a clumsy commander, but then he made an attack that was unlike him and caught Cham’s rebels off-guard. Slavin made Cham’s home his headquarters and Cham couldn’t even recover their Kalikori (a family heirloom Twi’leks pass down from generation to generation) when he escaped.

Hera vows to recover her family’s Kalikori, but Cham, Numa and Gobi (another Twi’lek fighter) will go with her. The rest of the Ghost team insists that Hera will not fight alone, so they’ll be coming too.

The Plan to Save a Family Heirloom

The plan to save the Syndulla Kalikori is sending Hera and Chopper into Slavin’s headquarters while the rest of the team creates a diversion. Cham thinks it will be difficult to get Hera into the headquarters, but Ezra thinks disguising himself as the Scout Trooper from earlier will help. As an aside, where did they stow the trooper’s body? Also, didn’t Hera say in “The Antilles Extraction” that Ezra is too well-known in the Empire? And isn’t Ezra a little short to be a Stormtrooper?

The team surprises an Imperial patrol, and gets the troopers and AT-DP to follow them into the canyon. Meanwhile, Ezra and Hera speed off. On the way, Ezra is impressed by Hera’s beautiful home. When they arrive at the gates, Ezra pretends that Hera is a prisoner and the Stormtooper lets them in. Clearly, they don’t like to check IDs on Ryloth. Chopper, wearing his Imperial paint-job, is already inside, mourning at the crashed Y-Wing at the center of the Syndulla home. Hera explains that it is a Y-Wing that crashed there during the Clone Wars and the same ship she pulled Chopper out of. Hera is confident that Chopper will eventually follow them on their mission.

Instead of presenting Hera to Slavin, they sneak around to Cham’s father’s office. They do find the Kalikori, so now they have to escape. While sneaking around, they see an officer. It’s Grand Admiral Thrawn. That would explain why Slavin beat Cham’s rebels. Ezra and Hera don’t know who Thrawn is yet, and manage to sneak into a lift to the lower levels of the home. Hera thinks they can use a basement exit to get out of the building. Unfortunately, Hera is wrong – the Imperials are using one of the rooms down there for planning operations. They get out of the room unnoticed and find Chopper in the halls.

Meanwhile, the rest of the team is still being chased by troopers and the AT-DP. Kanan and Sabine’s blurrg is shot, knocking them to the ground. Gobi uses a rocket launcher to create a barrier between the Imperials and them, but it won’t hold long. Cham tells Kanan that he hasn’t heard from Hera and they think something must have gone wrong already. (When do solo missions ever go right?) They decide to go to the headquarters to help her.

Back at the headquarters, Ezra and Hera try to walk out the front door, where there are less guards. They send Chopper out to make a diversion so they can escape. While Chopper distracts the guards, Ezra and Hera sneak up to the exit, only to find Thrawn and Slavin. Slavin thinks Hera is a servant, but Thrawn knows better. He takes the Kalikori from her and asks her what she thinks of the Imperial occupation. Hera tells Thrawn that she won’t be of any help, but he disagrees and has her taken to his office.

Hera plays the role of a poor refugee and Slavin buys it. But Thrawn does not. “She is far more valuable than you realize,” he says. “To defeat an enemy, you must know them,” Thrawn explains. “Not simply their battle tactics, but their history, philosophy, art.” Thrawn understands what the Kalikori is and how Hera was shaped by war all her life.

Hera realizes that she can no longer play a role because Thrawn has figured her out. He knows that she’s Hera, a member of the family that once lived in their headquarters. Ezra tries to make a quick move, but Thrawn stuns him.

“How did you know?” Slavin asks Thrawn, referring to his shot at Ezra.

“Because Rebels always have friends always rushing to the rescue.”

Burning Down the House

Thrawn throws Ezra and Hera into a detention cell and tells her that he’ll keep the Kalikori “in a place of honor.” She tells Thrawn that she would have destroyed it if she knew it would land in his hands, which surprises Thrawn. Hera explains that her family’s legacy belongs to her. “It is not for some collector’s curiosity,” she says.

After leaving the cell, Slavin thinks Thrawn should destroy the Twi’lek “trash.” Thrawn grabs him, showing a flash of anger, but then apologizes. “I had forgotten that not everyone is able to appreciate art as I do,” he says. Thrawn leaves Slavin to “finish your job,” since he’s running an “experiment” he has to attend to.

Outside, Cham and the other Ghost team members are still fighting. Suddenly, the Imperials stop firing and Slavin delivers a message to Cham. Slavin says they will kill Hera and Ezra unless Cham surrenders. Cham agrees to, but he needs proof that the captives will be released. If Cham doesn’t show up by sundown, they will be killed. Cham tells the team that he’ll rely on them to save Hera and Ezra when he turns himself in.

In the cell, Hera apologizes for the personal mission and insists that she should have known better. Chopper rushes in to tell them that Cham will surrender, which surprises Hera. Even though they could escape now, Hera has a plan. She tells Chopper to give them as many weapons and explosives as the droid can find. Ezra is surprised that Hera would blow up her house. “My home is my crew and family,” Hera says.

Thrawn is hovering over the home in a ship, watching the Ghost approach for the prisoner exchange. It looks like he plans to shoot at the house, too, unaware of Hera’s plans. While the exchange goes down, Chopper plants explosives throughout the house. When Chopper moves right past Slavin, the officer is surprised. Hera then apologizes – but not for getting her father captured. She orders Chopper to blow up the house. During the confusion, they all manage to escape and they speed away.

Oddly, Thrawn lets the Ghost get away. Slavin is angry, but Thrawn says he found the entire experience “enlightening.”

Back on the Ghost, Cham praises Hera’s performance. Kanan is sorry that they lost the Kalikori, but Hera realizes that no heirloom is needed to keep the memory of her mother alive. She has her family and friends. “As long as we hold on to that, she’ll live on.”

On October 22, Captain Rex rejoins the team for “The Last Battle.” But I’m sure we’ll be talking about “Hera’s Heroes” for awhile. The episode proves that Thrawn is going to be a major player for season three, and the aspects of the character author Timothy Zahn created are being brought to life.