The first trailer for Christopher Nolan’s highly anticipated World War II movie Dunkirk has finally arrived. The film, which stars Tom Hardy, is the first period piece from the director behind The Dark Knight and Interstellar. A seven-minute prologue from the film will be played before select IMAX screenings of Rogue One: A Star Wars Story this weekend.

The new trailer is the first footage we’ve seen from the film since the announcement trailer was shown before Suicide Squad this past summer. Unlike previous Nolan films that were shrouded in secrecy, this one is based on a true story.

Dunkirk tells the story of the Battle of Dunkirk, in which over 330,0000 Allied and British troops were evacuated from Dunkirk, France after the Germans decided to stop their advance.

In the trailer, we see plenty of action, as well as a glimpse of some of the film’s stars. Hardy, who starred in Nolan’s The Dark Knight Rises as Bane, plays Farrier. Cillian Murphy, who played Scarecrow in the Dark Knight films, is joined by Kenneth Branahgh, James D’Arcy and Oscar-winner Mark Rylance (Bridge of Spies). One Direction singer Harry Styles also has a part in the film.

Dunkirk opens on July 21, 2017 and is the first film from Nolan since Interstellar. That film won the Academy Award for Best Special Effects.

Audiences who see Rogue One in 70 mm IMAX this weekend will get to see the first seven minutes of the film, Slash Film reported. Here is the full list of theaters playing Rogue One in 70mm IMAX: 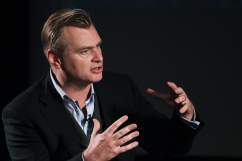