Marvel just dropped the first full teaser trailer for Guardians of the Galaxy, Vol. 2, since what we saw in October was actually a sneak peek. This new one puts Baby Groot front and center, as his adorable cuteness will likely help the Guardians save the galaxy from yet another threat.

The trailer shows Rocket Raccoon (Bradley Cooper) trying to tell Baby Groot (Vin Diesel) not to push a button, or he could kill everyone. It doesn’t go well.

The trailer was released just a couple of days after director James Gunn told the Hollywood Reporter that the marketing for Vol. 2 will keep the film mysterious. Indeed, the new trailer doesn’t reveal anything about the plot, it just promises the return of everyone’s favorite collection of oddball Marvel characters.

“With Guardians, it’s such an emotional and physical journey, going to all these different places. It’s like, ‘God, do I really want to show this planet we go to in the middle of the movie?” he said of cutting the new trailer. “Those are always hard choices to make.”

As for Pratt, he recently told British GQ that filming Vol. 2 really helped him deal with the loss of his father.

“The truth is I ripped open some wounds that had been healing for some time,” the Passengers star told the magazine. “And I didn’t want to. But I knew it was right for the moment… There are wounds that are never going to be totally healed. It would probably make for a better story if it was some emotional thing that I hadn’t dealt with… When we face the death of a parent, you sometimes feel regret that you didn’t fully embrace what you had.”

Vol. 2 hits theaters on May 5, 2017 and was directed by Gunn, who helmed the first movie. Once again, Chris Pratt, Zoe Saldana, Dave Bautista and Bradley Cooper will star as the Guardians of the Galaxy. Vin Diesel is also voicing Baby Groot.

Kurt Russell will be starring as Ego, Peter Quill’s father. Sylvester Stallone also has a role in the film. Elizabeth Debicki and This Is Us‘ Chris Sullivan are also joining the cast.

The first Guardians was truly the surprise hit of 2014, grossing $773 million worldwide. It’s astonishing, considering that none of the characters in the film were on the Marvel A-list before the film came out. 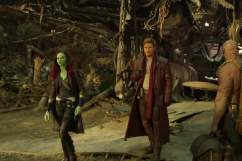