Happy V-Day to my absolute number one ❤️ Thank you, I love you and I'm in love with us… #Family #babyChmerkovskiy #HappyValentinesDay

The new season of Dancing With the Stars premieres on March 20, 2017, exactly one week after the finale of The Bachelor. This morning, Good Morning America had a major announcement in regards to the new season.

New parents Peta Murgatroyd and Maksim Chmerkovskiy are actually returning to the cast for this season, despite previously saying they were taking time off to be with their new baby boy.

When asked about how life on the show will be different post-baby, Murgatroyd said she believes it will take some time to get back to the fitness she had prior to being pregnant. She also said she’s going to take things slow and be sure that she is healthy. As for Chmerkovskiy, he says he’s excited that they are both going to be participating on the show because last time they were in the cast together, he won the season.

Chmerkovskiy was asked if his pro brother Val ever helps with the baby and he jokingly scoffed at the question, exclaiming, “No!” He then said his brother would probably use the baby to try to lure in women. The couple’s new son is named Shai.

@MaksimC and I are so excited to share the first photos of the love of our life, Shai Aleksander Chmerkovskiy, on @allthingsfamandglam today! ❤️ Link in my bio. Thank you for all the well wishes you've sent us as new parents. We feel the love and are so grateful! ? #FamAndGlam #BabyChmerkovskiy

On March 1, 2017, the new cast of Dancing With the Stars will be officially announced on Good Morning America. 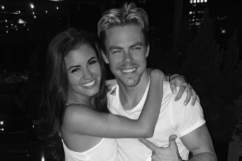 Does Derek Hough Have a Girlfriend?

Read More
Dancing With The Stars, DWTS, Reality TV, TV
Maksim Chmerkovskiy and fiancee Peta Murgatroyd are returning to the season 24 cast of Dancing With the Stars.