A brief teaser for Justice League aired during NBC’s Today Show, announcing that the first trailer for the film will be released on Saturday. Warner Bros. has yet to say how the trailer will be released, but it will be the first footage from the film since we saw scenes at San Diego Comic-Con in July 2016.

The footage began with the Aquaman logo on the screen, before showing off never-before-scene shots of Jason Momoa playing the character. The footage ended with a scene of the main Justice League members in a ship, ready to jump into action. There are expected to be more of these, one for eacch member of the team, before the trailer debuts.

Again, Warner Bros. didn’t announce anything before this tease was shown on Today, so it’s not clear when or where the studio will release the trailer. There are NCAA basketball games on Saturday on TBS, so that could be a possible venue if the studio wants a more high-profile outlet than just dropping it online.

While we wait for the new trailer, it’s a good idea to follow director Zack Snyder, who has been constantly sharing behind-the-scenes updates on his Twitter page. For example, here’s an Aquaman VFX test he posted on March 1:

Working on my birthday ? pic.twitter.com/tLidlUrcyn

Here’s a reel Snyder shared in October when principal photography wrapped in the U.K.

Last day filming in the UK. It has been an amazing shoot. Big thanks to everyone involved! #JusticeLeague pic.twitter.com/TEjEdlo81u

Justice League hits theaters on November 17, 2017. It’s surprising that Warner Bros. would start promoting the film in earnest now though, since Wonder Woman still hasn’t come out yet. That movie opens on June 2, 2017.

The new film stars Ben Affleck as Batman/Bruce Wayne and Gal Gadot as Wonder Woman/Diana. Ezra Miller plays The Flash and Ray Fisher plays Cyborg. Fisher, Mamoa and Miller were briefly seen in Batman v Superman: Dawn of Justice, and Miller also got a cameo in Suicide Squad. Batman v Superman ended with Bruce telling Diana that he needs to get a band together to face the coming challenges, now that Superman is “dead.”

The Justice League trailer is also dropping a year-to-the-day that Batman v Superman hit theaters. After this film, there won’t be another DC Comics movie until Aquaman hits theaters on December 21, 2018. It was supposed to hit two months earlier, but The Hollywood Reporter confirmed that the James Wan-directed movie was delayed.

In an interview with Collider in June, Snyder insisted that Justice League will have a lighter tone compared to Batman v Superman. He also confirmed that the first Justice League is definitely the a complete movie, so fans don’t have to worry about there being a huge cliffhanger at the end.

“I do believe that since Batman v Superman came out and we’ve wrapped our heads around what Justice League would be, I do think that the tone has, because of what fans have said and how the movie was received by some, is that we have kind of put the screws to what we thought the tone would be and I feel crushed it that little bit further,” Snyder explained.

The Cast of ‘Justice League’ 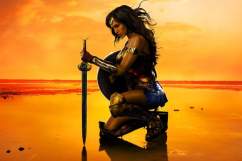