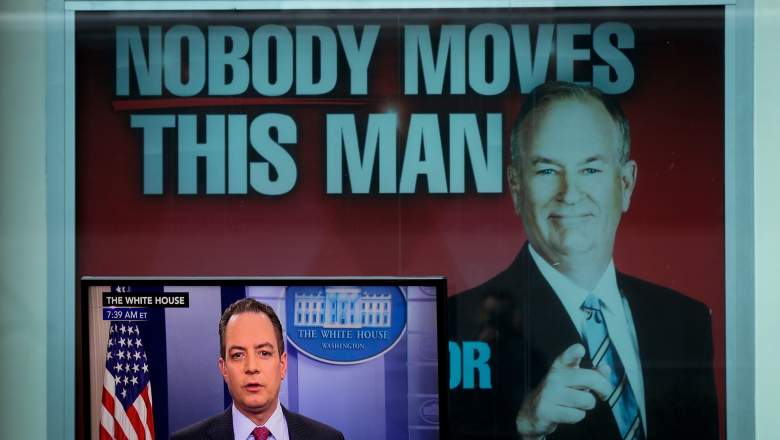 Bill O’Reilly, whose career at Fox News came to an abrupt end on April 19 following mounting allegations of sexual assault from women, became known for his on-air meltdowns and loud arguments even before joining the network.

O’Reilly was ultimately fired by Fox News after the network lost dozens of advertisers for The O’Reilly Factor after the The New York Times reported that Fox News and O’Reilly reached settlements with five women that totaled $13 million. O’Reilly has denied these claims, saying he reached the settlements to avoid controversy and to protect his children.

Here’s a look at some of O’Reilly’s best on-air meltdowns.

O’Reilly’s most famous meltdown happened on Inside Edition, where he worked from 1989 to 1995. During the meltdown, O’Reilly freaked out over a teleprompter. “I’ll do it live!” he yelled at the camera. “F**kin’ thing sucks!”

After the video surfaced, O’Reilly joked about it and claimed he had plenty of others he could sell. He joked that he was contractually obligated to create a “few dramas for the amusement of my co-workers.”

Despite O’Reilly’s attempts to downplay the Inside Edition meltdown, it became an Internet meme. Here’s the “Dance Remix” version.

And here’s the techno/disco remix:

In the above clip, Bill O’Reilly argued with Alan Colmes over whether or not President Barack Obama promised to cut any government programs. Colmes was a liberal voice on Fox News and died in February.

When Colmes died, O’Reilly remembered him on The O’Reilly Factor as a person who always cared about others. “He was unique to say the least,” O’Reilly said, adding, “The thing about Colmes is he had no malice, he’s a kind guy.”

O’Reilly went on CBS This Morning in November to plug his children’s book Give Peace a Chance, written with James Patterson. During the interview, he defended Fox News, telling the CBS hosts that it’s a “good place to work, all right!” He said he didn’t think it was right to use the network as a “pinata.”

The interview took place just after Megyn Kelly made accusations against Roger Ailes in her new memoir. She accused Ailes of sexual harassment. Although Kelly did not sue Fox News, Gretchen Carlson did and reportedly received a $20 million settlement.

Long before Donald Trump vowed to hold sanctuary cities accountable for not following through with federal immigration laws when it comes to illegal immigrants, Geraldo Rivera and O’Reilly had a heated argument about it. A drunk driver in Virginia killed a person and the driver turned out to be an illegal immigrant. “He doesn’t have a right to be hare,” O’Reilly yelled, slamming his fist on the table.

In 2008, O’Reilly had Barney Frank on his show to discuss the financial crisis. At the time, O’Reilly was calling for the then-Congressman from Massachusetts to resign. Frank tried to defend himself, claiming that O’Reilly was misrepresenting what he really said. The two argued, with O’Reilly even pointing to the camera and yelling at Frank, who was not even on the Factor set.

And part two, which was posted in December 2016.