It appears that Bethenny Frankel may currently be single, but tonight on Real Housewives of New York, we get to see her boyfriend at the time. So, who is Dennis Shields?

The first time we heard of Shields on the show was on last season’s reunion when fellow cast member Luann D’Agostino accused Frankel of dating a married man. Though Shields was still legally married, Frankel maintains that Shields and his wife were no longer together. In several Twitter posts, Frankel defended her relationship with Shields and she told People:

We’ve both been married and separated. So we’re a perfect match. Like everything else in my life, I’m owning it.

Shields makes a very good living for himself as the CEO of LawCash. He also comes from a mother who was a lawyer and his father, a neurologist, according to E! News. He is also the Founder of Esquire Bank and Yield Street.

#BethennyFrankel's boyfriend might sue her ex, Jason Hoppy, over a series of nasty emails he wrote her https://t.co/0Dtt4fqGVD pic.twitter.com/snb3UZAaaM

At one point in the relationship, Shields, Frankel and Frankel’s ex-husband Jason Hoppy got into an altercation over harassing emails. The altercation occurred at Frankel and Hoppy’s daughter’s school.

In April 2017, Frankel told People that she is single and doesn’t need a man to complete her life. Frankel stated that:

I am living the single life. I never really lived the single life before, and I am enjoying it. I have different things that I want now than I did 10 years ago and I don’t have any boxes to check. I think women always want to check a box that they need to have a kid [or] it’s time to have a kid … it’s time to get married and have someone financially support you — [but] I can check all the boxes for myself. I very much have my own life, my own money, my own daughter and my own career. I don’t need a man to check any of the boxes.

So, what else is going on with Frankel lately? Recently she announced that she is joining the cast of Shark Tank, so Frankel is expanding her television range. 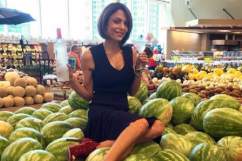