Share via E-mail Share on WhatsApp
Since his split from Angelina Jolie, Brad Pitt has been linked to quite a few famous women. For a couple of months, it was rumored that he was dating actress Kate Hudson. After those rumors fizzled out, others surfaced. Most recently, Pitt has been linked to both Sienna Miller and Elle Macpherson. Rumors that Pitt had been canoodling with both women surfaced within hours of each other.

According to The Sun, Pitt was spotted getting close to Miller at the Glastonbury Festival in the UK this weekend. The two were seen together at an after party at the festival’s exclusive Rabbit Hole area around 3:00 a.m. local time.

“Brad and Sienna couldn’t keep their hands off each other, touching and stroking each other at every opportunity. They seemed really intimate,” a source told The Sun. “They seemed keen to get away from prying eyes and made a dash for the Rabbit Hole, the festival’s underground and exclusive venue, with a group of friends and were inseparable as they waited to go inside. The party was cut short and they had to leave after five minutes because the venue was closing. Bradley Cooper left and Brad and Sienna headed back arm in arm to their private Winnebego,” the source added.

Meanwhile, Pitt has also been linked to Macpherson, the two spotted on some kind of date together in Hollywood. Glamour sites New Idea Magazine as the source of the rumor, a source telling the publication that Pitt and Macpherson appeared to be “on an intimate date.”

“They definitely seemed [cozy] together, like a couple on an intimate date. She was touching his arm a lot and flicking her hair over her shoulder – there was a lot of flirting going on. He was laughing at everything she said and leaning in really close,” a source revealed.

Macpherson and Pitt have known each other for many years. The Australian model recently filed for divorce from her real estate developer husband, Jeffrey Soffer. The former couple had been married for four years. 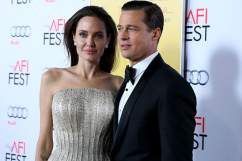