On tonight’s episode of Real Housewives of New York, Bethenny Frankel’s ex-husband is put on blast for his being arrested after a confrontation with Frankel at their daughter’s school. An NYPD spokesperson spoke to Us Weekly and said that in January 2017, Hoppy was arrested after contacting Frankel “numerous times via email and FaceTime, and approached [the] victim making verbal threats.” Hoppy allegedly approached Frankel at their daughter Bryn’s school and said: You can play your game. It doesn’t matter. You can get 10 lawyers. There’s nothing you can do to stop me. You’ll be sorry. The case was then adjourned until April 26, 2017. Then, People reported that Hoppy filed for dismissal of the case. But, it doesn’t look like this will happen, as a spokesperson from the New York District Attorney’s Office told People that:

There are no words to express how saddened Mr. Hoppy is over his ex-wife’s unjustified actions. His only concern is his daughter and intends to vigorously fight these false charges.

For the last two seasons, Frankel has opened up about her emotional and traumatic divorce that she says has been like torture. Now, though the divorce has ended, she still has to deal with her ex-husband since they have one child together. On an episode of Real Housewives of New York, Frankel talked about the aftermath of her divorce, saying:

Jason Hoppy and his legal representation have denied the allegations against him. 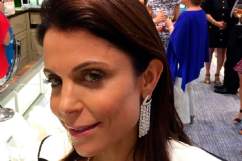