The music industry has been struck with the unexpected loss of one of its veteran singers.

Chester Bennington, 41, was found dead in a private residence in Palos Verdes Estates in L.A. County. His family was out of town, and his body was discovered by an employee on Thursday, shortly before 9 AM. He was the lead singer of the band Linkin Park and is survived by his wife Talinda Ann Bentley and his six children.

Los Angeles law enforcement tells TMZ that Bennington died of suicide. In a tweet by Ryan Parker of The Hollywood Reporter, however, Parker writes that “There are a few reports out there that Bennington died of hanging, but the coroner and fire department told me that is not confirmed.” An official statement on his death has yet to be released.

There are a few reports out there that Bennington died of hanging, but the coroner and fire department told me that is not confirmed. https://t.co/IBouts1pli

The singer had a history of struggling with drugs and alcohol, and admitted that he had considered taking his own life in the past. “I drank myself to the point where I couldn’t leave the house and I couldn’t function,” he told Celebrity Mania in 2009, “I wanted to kill myself. I could very easily not be the person who’s sitting here right now. I could be dead. It was a horrible, horrible existence.”

In an interview with Kerrang, Bennington also revealed that he was molested at seven-years-old: ”If I think back to when I was really young, to when I was being molested, to when all these horrible things were going on around me, I shudder.”

Bennington was close friends with Chris Cornell of Soundgarden, who also died of suicide by hanging in May. Today, July 20th, would have been Cornell’s 53rd birthday. Bennington was the godfather of one of Cornell’s kids, and he performed at his funeral, singing an emotional rendition of “Hallelujah.” 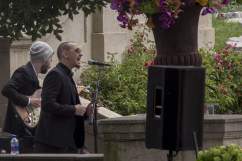 Bennington began his career with the grunge band Grey Daze, but it wasn’t until he joined Linkin Park in 1996 that he became a household name in rock. The band went on to become one of the most successful acts of the 2000s, with the diamond-certified album Hybrid Theory (2000) and Meteora (2003), which remains the most successful release in the history of the alternative rock charts.

Linkin Park is also known for popular singles like “Numb“, “In the End“, and “New Divide.”

Bennington (along with Mike Shinoda) sang lead vocals for Linkin Park and was characterized by his “higher-pitched” and “emotional” voice. As of 2017, Linkin Park has earned two Grammy Awards and sold over 70 million albums worldwide. Bennington was also the founder and frontman of the bands Dead by Sunrise and Bucket of Weenies. From 2013 to 2015, he sang lead vocals for the band Stone Temple Pilots.

Numerous fans and peers have already taken to social media to pay their respects to Bennington.

“Completely stunned to hear of Chester Bennington’s passing,” tweeted Black Veil Brides frontman Andy Biersack, “My heart is with his family and friends, what an absolutely tragic loss.” OneRepublic added “Oh dear God. Massive R.I.P to Chester Bennington of @linkinpark this BREAKS OUR HEART. Suicide is the devil on earth walking amongst us.”

Read some of the most notable tributes below.

Completely stunned to hear of Chester Bennington's passing. My heart is with his family and friends, what an absolutely tragic loss.

Oh dear God. Massive R.I.P to Chester Bennington of @linkinpark this BREAKS OUR HEART. Suicide is the devil on earth walking amongst us ?

RIP Chester Bennington. I hope you find peace. Thank you for the years of incredible music that helped shape the musician I am today.

Linkin Park bandmate Mike Shinoda wrote a preliminary update on Twitter, saying “Shocked and heartbroken, but it’s true. An official statement will come out as soon as we have one.”

Shocked and heartbroken, but it's true. An official statement will come out as soon as we have one. 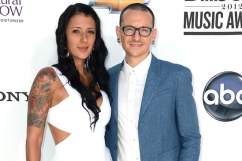