Tonight, Eunice Shriver will receive the Arthur Ashe Courage Award at the 2017 ESPYs.

Shriver, who passed away in 2009, was a member of the Kennedy family, and is best remembered for her work founding the Special Olympics.

Read on to learn more about her family, children, and husband.

1. Her Husband Was the Democratic Vice Presidential Candidate in 1972

Arnold Schwarzenegger’s parents-in-law Sargent and Eunice Shriver stand beside Msgr. Lloyd Torgerson (R) at the start of Schwarzenegger’s inauguration as governor of the state of California.

Shriver’s husband, Sargent Shriver, was the US Ambassador to France during Lyndon Johnson’s presidency. He was also the Democratic vice presidential candidate in the 1972 Presidential Election.

2. Her Daughter Is the Estranged Wife of Arnold Schwarzenegger

One of Shriver’s children is Maria Shriver, a journalist and the former First Lady of California. (Shriver is the estranged wife of Arnold Schwarzenegger.) The two married in 1986 and separated in 2011.

In 1988, Shriver received a Peabody Award as the co-anchor of NBC’s coverage of the 1988 Summer Olympics.

The Eunice Kennedy Shriver website, called “One Woman’s Vision”, credits Maria as once saying, “[My mother] is the single most competitive person I have ever known.” 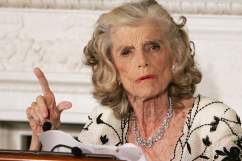 U.S. President John Fitzgerald Kennedy is shown in this 1960 photograph.

Speaking about the family, the youngest Kennedy son, Teddy, is reported as saying, “Her older brothers [Joe and Jack] were very active… They were athletes, very good students and had a lot of friends. Eunice had to compete. Around her brothers and sisters, she always seemed to try a little harder, be a little more involved and a little more engaged.”

4. She Has 5 Children and 19 Grandchildren

5. Her Sister Rosemary Was Intellectually Disabled and Underwent a Prefrontal Lobotomy

Mrs Rose Kennedy, wife of Joseph Kennedy, American ambassador to Britain, with her daughters, Kathleen and Rosemary, leaving their London house to be presented at court.

Eunice’s sister Rosemary was the eldest Kennedy daughter, and suffered from intellectual disabilities. It’s believed that Rosemary’s condition inspired Eunice to found the Special Olympics in 1962.

In 1941, Rosemary underwent a prefontal lobotomy that made her situation worse. After the operation, she was unable to regain movement in her right arm, and became incapable of taking care of herself.

In 1962, Eunice wrote an article detailing her sister’s life. Towards the beginning of the piece, she writes, “She was slower to crawl, slower to walk and speak than her two bright brothers. My mother was told she would catch up later, but she never did.” Read the piece here. 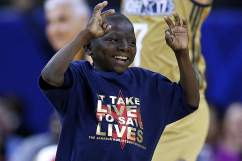