Bran was very different tonight on Game of Thrones when Sansa finally saw him again. Now that he’s the Three-Eyed Raven, he’s almost emotionless. He can see everything that’s happened in the past and that’s happening right  now, but he’s still trying to figure out how all of that works.

Here’s a quick recap of the Three-Eyed Raven, to give you a better idea of what’s happening to Bran Stark.

Bran can warg. Some people who can warg end up being Greenseers. Greenseers are incredibly rare and can see the future and the past, along with seeing and hearing through the weirwood trees that have faces on them (like the tree that Bran was sitting in front of while he and Sansa were talking.) The people with Greensight, or the “Greenseers,” are the wise men of the Children of the Forest. Jojen Reed had this greensight, and helped Bran understand that he had the greensight too. That’s why Bran can dream of the future and the past.

The Three-Eyed Raven was the last Greenseer, and a human living among the Children of the Forest. In Season 1, he appeared to Bran in dreams after Bran woke from his coma. Bran thought the Raven was leading him into the crypts to find his dad, but instead he found Rickon, who was having the same dreams. That’s when they learn that Ned was killed.

In Season 3, Bran dreams of the Raven again. A boy — Jojen — appears to him in the dream and tells him that he can’t kill the raven because he is the raven. Jojen and his sister Meera later meet Bran in real life, where Jojen explains how greensight works.

In Season 4, Bran sees the Raven when he touches a weirwood beyond the Wall. He hears a voice that says, “Look for me, beneath the tree. North!” They finally reach the giant weirwood tree, but Jojen is killed. The Children of the Forest appear and save them, leading them into a cave that the wights can’t enter because the wights’ magic has no power there. In this cave, Bran finally meets the Three-Eyed Raven face-to-face. He’s an old man whose body is fused to a weirwood tree.

The Raven man tells Bran that he’s been many things, and is now the Raven. He said he’s been watching them all their lives. He then adds that Bran will never walk again, but he will learn how to fly.

In Season 6, the Raven teaches Bran about Greensight, showing him many visions, including one that reveals who Jon’s real parents are. He warns Bran, when Bran wants to stay in a vision of the past, that Greensight is powerful and he must resist that urge. He reprimands Bran for trying to interact with the past, even though it seems like past-Ned could hear Bran call to him.

Later, through Greensight, the Raven reveals that the Children of the Forest created the White Walkers from the First Men, using dragonglass inserted in his heart.

Game of Thrones 6×05 – Bran Learns Who Created the White WalkersThe Three-Eyed Raven and Bran are seeing a vision of the past. A group of Children of the Forest perform a ritual on a man tied to a stone outside a Weirwood tree. They stab him through the heart and he becomes a White Walker. Leaf tells Bran they needed the White Walkers because they…2016-05-23T05:20:54.000Z

Bran later sees a vision of the Wight army north of the Wall, and the Night King sees him in the vision. Even though Bran’s in a vision, the Night King can grab his arm, leaving a mark. This mark neutralizes the magic in the cave that kept the wights away. It also seems to indicate that the Night King has a type of Greensight of his own.

As they are escaping the cave, Bran somehow connects Hodor from the past with Hodor of the present, causing a feedback loop that leads to Hodor yelling “Hold the Door” while he’s keeping the Wights at bay, giving Meera and Bran time to escape. Hodor dies in the process.

The Three-Eyed Raven was killed by the Night King, but before he died the Raven gave all his knowledge to Bran. Now Bran is the Three-Eyed Raven in his place. It’s not clear what the identity is of the original Three-Eyed Raven. (The books provide more clues, but at this point it’s unclear if the book’s Raven’s origins are the same as the show’s.)

And now, a question remains. Can Bran, as the Three Eyed Raven, change and interact with the past? It appears that he can. Some believe this means that he is the old man Three-Eyed Raven too. Others believe he got caught even farther in the past and became Bran the Builder. Read more about that in the story below: 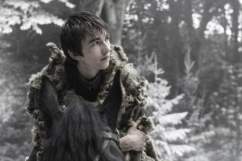 Read More
Game Of Thrones, HBO, TV
Learn all about the Three-Eyed Raven and how he has been portrayed on the show in the past. This can help you better understand what has happened to Bran Stark.