Maya Fox-Davis allegedly accused singer Usher Raymond of giving her herpes in 2012 and not disclosing to her that he had the STD, in court records published by Radar Online. Get to know Davis in our 5 Fast Facts below.

1. Davis Was a Bridesmaid In Raymond’s Wedding to Ex-Wife Tameka Foster Glover Raymond

Raymond and ex-wife Tameka were married in August 2007 and Davis is photographed with the couple as a member of the bridal party. The couple divorced just two years later.

In 2015, Raymond married second wife Grace Miguel in a secret wedding, according to Hollywood Life. Miguel is Usher Raymond’s manager.

2. She Makes a Living as a Celebrity Stylist

According to Davis’ Facebook account, she is originally from Oakland, California and currently resides in Los Angeles. She studied at FIDM, the Fashion Institute of Design and Merchandising, in San Francisco and went on to become a celebrity stylist. According to Straight from the Tea, Davis’ business partner is a woman named Ashley North, who is pictured in the above Instagram photo.

3. Usher Raymond Settled a Lawsuit with Davis for Over $1 Million

In the lawsuit between Davis and Raymond, the case was settled with Raymond dishing over over $1 million to Davis. There was also a check made to Davis for $2,754.40, which allegedly was for covering her medical bills. It is pictured in the court records.

Other big stars have been in similar situations. For example, Charlie Sheen came out on national television to reveal that he had HIV and he said that his decision to come out was partly because it was getting too expensive to pay off other people. On the Today Show, he said that he paid more than $10 million to keep his illness a secret.

4. In Court, Usher’s Ex-Wife Claimed He Cheated With Davis During Their Marriage

Radar Online reported that during a child custody battle between Raymond and his ex-wife Tameka, Tameka’s attorney claimed that Raymond was caught having sex with Davis by a nanny of theirs. In 2008, when Tameka was pregnant with the couple’s second child, Raymond and Davis were also photographed together on what appeared to be a playground.

In 2012, Raymond’s ex-wife opened up in an interview on Entertainment Tonight, talking about Raymond’s alleged affair. She stated that:

I hate to say it, but I somewhat empathise with her … She fell into somewhat of a trap. I think that she got very close to him as a result of being my friend and I feel like he used it to his advantage.

And, in an interview with Oprah Winfrey that same year, Raymond admitted to cheating on his ex-wife.

5. Justin Bieber Was One of Davis’ Clients When He Was a Protege of Raymond’s

Justin Bieber was one of Raymond’s proteges and reportedly was a client of Davis’ years ago. According to Straight From the Tea, other celebrities that Davis has styled include The Game, Kevin Hart, Chris Brown, J. Cole, Monica and Shannon Brown. 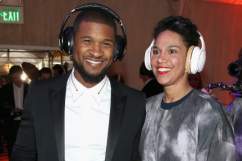