Rarri True and Rob Kardashian hopped on Facetime at some point today, this according to Rarri’s Instagram Live. A few hours ago, Rarri, who has had some sort of relationship with Kardashian’s ex, Blac Chyna, over the past few months (at least), posted a picture of his phone whilst he was talking to Kardashian. Check out the photo below.

In another post, Rarri encourages his Instagram followers to talk to him using the mobile app, Veri. He says that he will tell people the “real story.”

This is not the first time that Kardashian and Rarri have spoken. As evidenced by Kardashian’s Instgram rant that took place on Wednesday, the two men have had a few text conversations in the past. Kardashian has accused Rarri of asking him to help him financially.

You can check out one of those exchanges below. In them, Kardashian did not block out Rarri’s phone number. He has been receiving hundreds of texts and calls since Kardashian’s posts went viral.

On Thursday, Rarri posted photos of a topless Chyna in his bed. In the posts, he directly referenced Kardashian’s claims. He has since deleted one of the photos, but you can see the other one below.

Rarri is just one of the guys that has been linked to Chyna over the past three days. She has also been seen kissing Mechie in a video that Kardashian said she sent him — it’s really what started this whole thing. She has also been linked to her hairstylist, Kellon Deryck. The two hit the town together on Thursday evening after Deryck transformed Chyna, giving her “unicorn hair.” 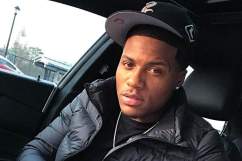