Gilles Mingasson/Netflix Lily Collins in To The Bone.

You don’t have to head to the theaters to see the new film starring Lily Collins and Keanu Reeves. To The Bone, which earned good reviews after its debut at the 2017 Sundance Film Festival is now available to stream on Netflix. Read on for a preview of the film and to meet its cast.

To The Bone was written and directed by Marti Nixon, an Emmy-nominated television writer whose worked on Angel, Buffy The Vampire Slayer, Girlfriends’ Guide to Divorce and UnREAL. The film is her first film as director, although she also wrote the films Fight Night (2011), I Am Number Four and Just A Little Harmless Sex.

The film stars Lily Collins as Ellen, a girl struggling with anorexia, and Keanu Reeves as Dr. William Beckman, an unconventional doctor who hopes to help her. The film is based on Nixon’s own struggle with anorexia.

To The Bone runs 107 minutes long and has am 83 percent fresh rating from Rotten Tomatoes.

NetflixLily Collins in To The Bone.

Lily Collins is in the midst of her year as a “streaming star.” She was last seen in Bong Joon-Ho’s Okja, which was also released on Netflix. Next, she’ll be seen in the Amazon TV series The Last Tycoon with Matt Bomer. Collins, who is the daughter of pop star Phil Collins, earned a Golden Globe nomination for 2016’s Rules Don’t Apply. Her other credits include The Mortal Instruments: City of Bones and Mirror, Mirror.

Gilles Mingasson/NetflixKeanu Reeves (left) and Lily Collins in To The Bone.

While The Matrix star Keanu Reeves never really went anywhere, he is in the middle of a string of successful projects. His career as an action movie star was revived by the John Wick movies, and he’s dabbled in dramas with roles in The Neon Demon and The Whole Truth. Other recent films include Exposed, The Bad Batch and Knock Knock. In 2016, he also voiced the title character (a cat) in the Key & Peele movie Keanu.

Gilles Mingasson/NetflixLiana Liberato, Carrie Preston and Lilly Collins in To The Bone.

Carrie Preston is an Emmy-winning actress thanks to her guest role as Elsbeth Tascioni on CBS’ The Good Wife. The role earned her another nomination in 2016. However, Preston is best known for starring as Arlene Fowler on True Blood from 2008 to 2014. She also appeared in an episode of Netflix’s Grace and Frankie in 2016. Preston has reprised her Good Wife role in the spin-off series The Good Fight. She’s also known for roles on Person of Interest, Claws and Happyish.

Gilles Mingasson/NetflixLiana Liberato and Lily Collins in To The Bone.

Liana Liberato is only 22 years old, but she has 24 credits to her name. She’s best known for her roles in If I Stay, Trust, Erased and The Best of Me. She made her acting debut in 2005, when she appeared in episodes of CSI: Miami, Cold Case and The Inside.

Kathryn Prescott starred in Finding Carter as the title character, Carter Stevens. The series ran on MTV for two seasons in 2014 and 2015. She also starred on Skins as Emily Fitch and Reign as Penelope. She was in two shows during the 2016-2017 TV season, AMC’s The Son and Fox’s 24: Legacy.

Gilles Mingasson/NetflixLily Collins and Alex Sharp in To The Bone.

To The Bone might mark Alex Sharp’s first movie, but he’s already a big star in the entertainment world. He’s best known for originating the role of Christopher Boone in The Curious Incident of the Dog in the Night-Time, which earned him Tony and Drama Desk Awards. Sharp’s second film, How To Talk to Girls At Parties, debuted at this year’s Cannes Film Festival. 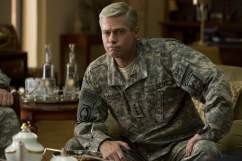