Singer Zara Larsson is one of the hottest names in music these days, but fans should know that she’s taken. And she’s 100% smitten with her man.

For a few months now, Larsson has been dating British model Brian Whittaker. As of March, Whittaker was just finishing up college (the UK equivalent of American high school). Now, he’s focusing his career on modeling and whatever opportunities come his way.

Read on to learn more about Brian Whittaker.

1. They Met When Zara Tracked Him down on Twitter

My lady a go getter ?

The way Zara and Brian met is worthy of its own movie.

In November 2015, Larsson tweeted a photo of Whittaker (though she didn’t even know his name at the time), and commented: “Who are you where do you live how old are you why are you so fine how do you like your eggs cooked in the morning?”

Two months later, she posted another pic of Whittaker to Instagram with the caption, “Slice me with that jawline.”

Fast forward a few months and Brian is now popping up in Larsson’s Snapchats. Then, on June 17, Larsson tweeted: “Hello everyone I just wanted to tell y’all than I’m in love so the next album will probably be cheesy.”

Since then, the two have been very public about their relationship on social media. Larsson has posted a number of pics of Brian, who’s done the same.

2. He Is a British Model

If this wasn't the best fashion show of this season then I don't know what was! Thanks for having me @philippplein78 and @carineroitfeld

Brian is a model with IMG Models, according to his Instagram.

A previous model bio from November 2015 reveals that he was born in Solihull, in Birmingham, England, which is where he lived as of then.

Whittaker continues, “My mom is from a beautiful Caribbean Island called Turks & Caicos and my dad is from Vancouver Island, Canada (BC).”

Thanks for my new hair style @zaralarsson

Brian has a massive Instagram following with 736K followers (he only follows 338).

The model is very candid in his social media posts, and makes a point to post a lot of positive messages for his fans. He tells Complex, “I get told from real people that aren’t just in the comments—people that I encounter in real life—that I’ve had an impact in their life. It’s a great feeling.”

He later adds on that for him, it isn’t all about the numbers. “I’ve built an audience of half a million Instagram followers, which isn’t huge by all means—there’s real celebrities that have a lot more followers and much wider audience. But still, if I can at least help one person, then I’ve done the right thing in my opinion.”

4. He Opened up About His Issues with Mental Health and Depression in a Recent Interview with Complex

In a March interview with Complex, Whittaker opened up about his experience with depression and anxiety. He says that when he first got started as a model, “I did have a bit of a depression period. It was really hard for me to even meet new people, because if I met someone new, I’d get butterflies in my stomach, and I wouldn’t be able to make eye contact. I wouldn’t be able to make conversation.”

The feeling of depression lingered even as Whittaker started to gain traction on Instagram. “Every single day would be the same,” he says. “I’d go to school, be depressed at school, come home, and be depressed.

In a recent Instagram post, Whittaker embraced his prior insecurities. He captioned a photo of him smiling, open-mouthed: “Starting the new year with a positive attitude ! You guys never see me smiling because I’ve always been too shy to show my teeth because of my gaps although I have accepted I have them and I have accepted that my teeth aren’t abnormally white either from some kind of teeth kit, this year I would like to be a little more comfortable with my smile as well as lots of other things, happy new year guys ? photo by @dimitristheocharis ??⚡”

Starting the new year with a positive attitude ! You guys never see me smiling because I've always been too shy to show my teeth because of my gaps although I have accepted I have them and I have accepted that my teeth aren't abnormally white either from some kind of teeth kit, this year I would like to be a little more comfortable with my smile as well as lots of other things, happy new year guys ? photo by @dimitristheocharis ??⚡

5. He Was Discovered by a Fellow Model on Instagram

Here's me looking not so friendly for @philippplein78

Whittaker was discovered by a fellow model who saw his Instagram account and told him he should contact his agency. In his interview with Complex, Whittaker explains that after being reached out to, he was signed by Select Model Management in the UK. “The rest is history,” he says.

It took about a year before he landed his first campaign. 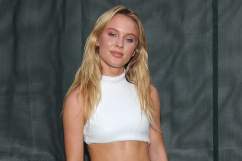 Zara Larsson Relationship Status: Who Is She Dating? 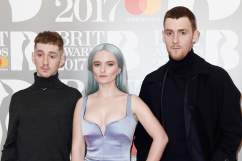 Read More
Celebrities, Teen Choice Awards
Zara Larsson is dating British model Brian Whittaker. They met after she tracked him down on Twitter.