Demi Lovato is currently single according to the website, WhosDatedWho. The songstress has not been linked to anyone romantically since before the summer.

The singer, who recently released her latest single “Sorry Not Sorry,” is a big fan of MMA and will be singing the National Anthem before the Conor McGregor/Floyd Mayweather fight on Saturday, August 21, according to TMZ.

Lovato, 25, most recently dated MMA fighter Guilherme “Bomba” Vasconcelos. The two went out on a couple of casual dates, but didn’t get serious at first. Lovato ended up dating another MMA fighter, Luke Rockhold, for a short time before deciding that she wanted to give things with “Bomba” a real shot, according to TMZ. Lovato and Bomba dated for four months before breaking things off in May.

“It wasn’t a dramatic split. Bomba is a good guy, but the relationship just ran its course,” a source told People Magazine at the time.

Before dating two MMA fighters, Lovato was with Wilmer Valderrama. The couple dated from 2010 through 2016, but ultimately decided that they were better off just being friends. The two announced their decision to part ways on social media.

“After almost 6 loving and wonderful years together, we have decided to end our relationship. This was an incredibly difficult decision for both of us, but we have realized more than anything that we are better as best friends. We will always be supportive of one another. Thank you to everyone who has offered us kindness and support over the years. With only love, Wilmer & Demi,” their joint post read.

Valderrama started dating actress Chantel Jeffries in July. According to PopSugar, Jeffries was linked to Justin Bieber back in 2014. 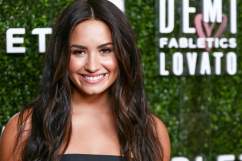