There was a pretty tense moment at the end of Rick and Morty Season 3 Episode 5, and now fans are wondering exactly what happened to Summer’s boyfriend, Ethan. If you blinked, you missed it.

Spoilers for the Whirly Dirly Conspiracy episode below.

Near the end of the episode, we saw Morty go pretty dark on Summer’s ex-boyfriend. He talked about how Ethan hurt his sister and he looked at him very seriously, while sitting next to the Morphizer-Xe.

It didn’t look good for Ethan.

And honestly, it doesn’t look good for Morty too, since he seems to be going really dark.

It turns out, Morty did use the Morphizer on Ethan. He mutated Ethan terribly and then just left him like that, never planning to fix him again apparently.  This is how Ethan looked in the after credits scene:

We know it’s Ethan because here he is with Trisha Lange, wearing the same clothes.

(And in case you were wondering, this isn’t the first time Ethan’s been experimented on. A different universe Ethan had an Anatomy Park experiment done on him. So it looks like Ethan’s fate is to be mutated by one of Rick’s science projects, no matter what he does.)

But Ethan’s mtuation was really dark of Morty. Fans think that Morty is either turning into Rick, or slowly turning into another version of Evil Morty. What do you think? 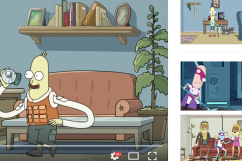 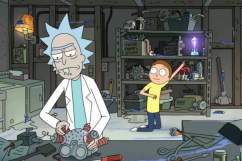