Fans of American Vandal – the Netflix parody about dick vandalism – are already ready for Season 2, especially because the eight-episode show left some critical unanswered questions. Namely: Who drew the dicks?

Warning: There are plot spoilers for season 1 below.

Will there be a Season 2 of American Vandal? The first season just came out in September 2017, but a lot of people have already binge watched it, and buzz about the show is starting to pick up online.

It’s funny. If you ever thought a dick joke couldn’t work for an entire show, you’re wrong. The show is a spoof of true-crime documentaries like Serial, Making a Murderer, and Jinx. It’s also a classic whodunit, with a cast of high school archetypes who take turns looking like they probably did it. The school board has rushed to judgment against the school outcast with the goofy YouTube prank channel, Dylan Maxwell, but a pair of teenage documentary filmmakers isn’t so sure.

In the end, the show presents its most compelling argument for the dick drawer, but it stops short of arguing its final suspect actually did it. That left open the door for another season. In its own way, the show makes you really think about how easy it is to make it look like almost anyone did it based on circumstantial evidence (he had access! She had motive!) It also makes its viewers question whether they’re more predisposed to rush to judgment against some people than others (he just looks weird; she’s not popular.)

If you’re a fan, you’re in luck. The show’s creators have given interviews that make it sound like there will probably be a second season of American Vandal. It’s far from clear, though, whether it would focus on the same characters or plot, and Netflix has not yet officially confirmed there will be a season 2.

Co-creators Tony Yacenda and Dan Perrault spoke to Mashable about the chances for a season 2 and what that might entail.

“We’d love to keep doing it,” Perrault told Mashable. “There’s definitely more tropes of the true crime genre to hit. And we’re lucky that this happened: Even since writing and shooting this show, more true-crime docs have popped up… there’s been a handful of docs that have come out since we’ve conceived this idea that we’d love to take on in another season.” He cited The Keepers and Amanda Knox documentaries on Netflix.

Yacenda told the site that season 2 could be different, noting, “all these docs have different tones and styles and everything, different conventions that we haven’t used in the first season. We drew a lot from Serial and Making a Murderer in this season, but there’s so much we could do from Thin Blue Line or The Jinx, these tropes. You can’t do every tone at once.”

Yacenda made it clear they’d likely stick to the concept of “merging documentary and then fictional narrative,” but it might not be set at Hanover High. Yacenda told Mashable: “I don’t what we’re allowed to talk about, but the core conceit is probably it would be another medium-stakes crime taken to really serious ends. I mean, we could go even further with it. I’m very excited for Season 2. We know what we want to do. We just don’t know what we’re allowed to talk about.”

IndieWire noted that the good reviews from critics and audience makes season 2 more likely. “Season 2 of ‘American Vandal’ isn’t out of the realm of possibility. Yacenda and Perrault are tight-lipped on plans for now,” the site noted.

Asked again about season 2, Yacenda said, according to DigitalSpy, “I know there’s just so many documentaries that I love that have different tones and styles. I’d be super excited to pull from that, from an existing wealth of tools that we can use that we haven’t yet.” 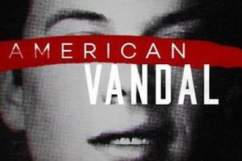 American Vandal: Who Did It? Who Drew the Dicks? [SPOILERS]

Read More
Breaking News, Netflix
American Vandal, Netflix' new mockumentary, is getting a good reaction from critics and viewers. Will there be a season 2? What's the release date?