With Hurricane Harvey and Hurricane Irma hitting the United States back-to-back, celebrities and prominent figures have come together to bring America a benefit titled Hand in Hand. During the hour-long telethon, there will be performances and celebrity appearances, from 8 – 9 p.m. ET/PT time delayed. The TV channels featuring the benefit include ABC, NBC, CBS, BET, Bravo, CMT, E!, Fox, HBO, iHeart Media, MTV, Oxygen, SiriusXM, Univision and Westwood One.

Fortunately, for those who do not have cable, MTV has posted a live stream of the telethon on YouTube and you can watch it above.

The telethon can also be watched on a number of channel-related live streams. For example, if you would like to watch the telethon via CBS All-Access, the only legal way to stream without a cable subscription — or a subscription to a cable-replacement service (like Sony’s Vue) — is via CBS All Access, a service that streams live CBS broadcasts in most U.S. markets.

The service costs $5.99 a month, but you can stream the benefit today for free via the service’s free 7-day trial. You’ll have to enter your valid U.S. credit card information to sign up, but you won’t be charged if you cancel your subscription before the trial ends.

To recap: If you’re looking for a free live stream of today’s telethon show, you can sign up for the free trial here, stream the show, and then cancel your subscription within 7 days to avoid charges.

ABC, NBC, Bravo, and other networks have live TV options available as well. 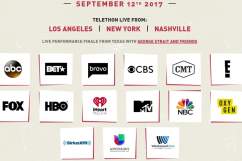