The cast of Alaskan Bush People has been completely focused on the family’s matriarch, Ami Brown, as she battles Stage III (potentially Stage IV) lung cancer. The Brown family moved from Alaskan to the contiguous 48 so that Ami could receive chemotherapy and radiation treatment in California. She has been surrounding by her family, but in recent weeks, some her kids have been spotted in other states.

According to the Facebook page, “Alaskan Bush People Exposed,” Ami’s sons Noah and “Joshua” a.k.a. Bam Bam are no longer in California. Bam was recently spotted in Colorado while Noah was seen in Montana with his girlfriend, Rhain. Photos taken by fans of the show were obtained by the non-fan Facebook page’s curator, who posted them for all to see.

Many people were curious about why the boys had left California, and one person even asked if Ami was doing better since all of her kids aren’t by her side.

“She’s not fine. Life Goes On,” wrote the page’s curator, suggesting that the family is trying to get back to their normal lives despite dealing with the

Ami is out of the hospital, but it said to be very weak. She has finished chemotherapy, but the treatment has definitely taken its toll. Neither the Browns nor the Discovery Channel have given any kind of update on Ami’s current condition. In addition, there has been no new information about whether or not Alaskan Bush People will begin filming a new season.

Previous reports have indicated that the Browns wanted to focus on Ami and had agreed to put filming on the back burned. However, other outlets have reported that the Brown family is going to resume filming, especially because Alaskan Bush People fans have been so invested in this family and in Ami’s health. 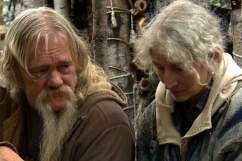