Eminem’s little girl is all grown up. Hailie Jade Scott Mathers, the daughter of the rapper, has been featured in numerous of his songs over the years and is now attending college in Michigan.

Hailie was born on December 25, 1995 and is the daughter of Eminem and his ex-wife Kim Scott, who’s largely stayed out of the spotlight after taking a brunt of criticism in songs as the rapper was growing in the music industry.

During a 2010 interview with Rolling Stone, Eminem spoke about what the most important part of being a father is for him.

“Just being there, not missing things,” he said to the publication. “If there’s anything important going on, regardless of what it is, I’m there. Helping them with homework when you can. At the grades my older ones are in, it’s hard. I never even passed ninth grade. They’re already way smarter than me.”

Here’s what you need to know about Hailie:

1. Eminem Reportedly Worked 60 Hours a Week at a Restaurant After Her Birth

Hailie was born before Eminem started his legendary rapping career, and her birth signaled to him that he had to do more to make sure she was financially stable in her life.

In a 2000 article by Salon, Eminem’s former manager at the restaurant he used to work at said for a short period of time, Eminem gave up on a musical career. Instead, he worked 60 hours a week at the restaurant in an effort to make sure his daughter had what she needed.

“He didn’t want his daughter to grow up like he did, living from day to day and moving from week to week,” manager Mike Mazur said.

Eminem and Kim split up briefly in 1996 and Kim took Hailie to live with her in a one-bedroom apartment. During the period, Eminem moved back in with his mother. It’s believed that’s where his “Slim Shady” rapping persona began.

2. Eminem Wrote About her in Numerous Songs

Over the years, Eminem has rapped about Hailie numerous times in his songs. In the 2004 song “Mockingbird,” he raps about the time that he lost his job at the restaurant just before Christmas, which happens to be her birthday.

In the song, he tells the story about him doing the best he could to comfort Hailie financially, even as the drama in their family life grew.

Hailie, I know you miss your mom
And I know you miss your dad when I’m gone
But I’m tryin’ to give you the life that I never had
I can see you’re sad
Even when you smile, even when you laugh
I can see it in your eyes, deep inside you wanna cry
‘Cause you’re scared, I ain’t there
Daddy’s with you in your prayers
No more crying, wipe them tears
Daddy’s here, no more nightmares
We gon’ pull together through it, we gon’ do it

The 44-year-old rapper talks about Hailie in other songs, including 2009’s “When I’m Gone.” The song was a farewell to fans of sorts as he went on a hiatus from writing music afterward. The song talks about his relationship with Hailie over the years, and he recalls some of his biggest regrets as a parent as she grew up.

Have you ever loved someone so much, you’d give an arm for?
Not the expression, no, literally give an arm for?
When they know they’re your heart
And you know you were their armor
And you will destroy anyone who would try to harm her
But what happens when karma
Turns right around and bites you?
And everything you stand for turns on you to spite you?
What happens when you become the main source of her pain?
“Daddy, look what I made!” Dad’s gotta go catch a plane
“Daddy, where’s Mommy? I can’t find Mommy, where is she?”
I don’t know, go play, Hailie, baby, your daddy’s busy
Daddy’s writing a song, this song ain’t gon’ write itself
I’ll give you one underdog, then you gotta swing by yourself
Then turn right around on that song and tell her you love her
And put hands on her mother who’s a spitting image of her
That’s Slim Shady, yeah, baby, Slim Shady’s crazy
Shady made me, but tonight Shady’s rocka-by-baby

In total, Hailie is mentioned in at least 22 of Eminem’s song, including a song he dedicated to her called “Hailie’s Song,” where the Detroit native tries his hand at singing.

3. Hailie Was the Homecoming Queen in High School

Hailie attended Chippewa Valley High School and was crowned homecoming queen in 2013. Her fellow students described her as a “smart, athletic and caring young woman” to Macomb Daily.

The Macomb Daily report also said Eminem was in attendance when she was crowned queen, but sat inside of an empty classroom so that he wouldn’t take any attention away from his daughter and the moment.

“Hailie came out with her mother Kim (Scott) when she was introduced with all the other kids but her father watched from inside the school because he didn’t want to cause a scene — he wanted Hailie to have her own moment,” one parent who asked not to be identified told the newspaper.

Chippewa Valley Board of Education President George Sobah told the newspaper that Eminem was sitting in a cafeteria inside the school, and that he was “beaming with pride” even though he wasn’t physically outside to see her become homecoming queen.

4. She Graduated With a 3.9 GPA & Played Volleyball

According to her profile in the commencement program, she was a member of National Honor Society, Art Club, Key Club, Student Council and also played volleyball.

In the section of the program where it asks who was most influential to her, she wrote: “My mother and father are because they have pushed me to be the person I am and have given me all the support to achieve what I have.” 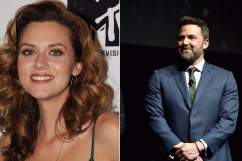 After graduating high school Hailie went on to attend Michigan State University, where she studies psychology and wants to become an entrepreneur.

A 2016 Instagram post indicated that Hailie is a member of the Zeta Tau Alpha sorority at the school. It’s anticipated that she will graduate during the spring of 2018.

Read More
Eminem, Entertainment
Eminem's daughter, Hailie Jade Scott, is all grown up at 21-years old. See what she's up to nowadays and photos of the rapper's daughter.